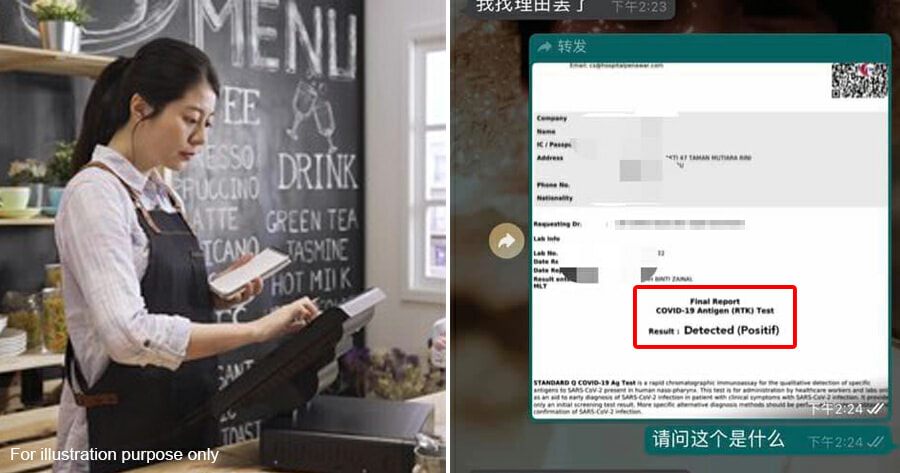 A woman who got a job at a cafe in Skudai, Johor lied to her boss that she tested positive for Covid-19 and even provided false results because she didn’t want to work at the cafe anymore.

The employer found her behaviour extremely unacceptable as he had to go through the trouble of shutting down the cafe and pay for all his employees to get tested for Covid-19.

In a Facebook post, he said that running a business during the pandemic is tough as it is uncertain when the country will go into MCO again. He added that it is also uncertain who has contracted Covid-19 due to close contact cases with other people.

On 6 April, he said he received a text from one of his employees, who had only worked at the cafe for one day. She told him that she tested positive for Covid-19 and even showed him the test results.

He said he immediately arranged for all his staff on duty to get tested, and fortunately, all of them tested negative. He also had to shut down his cafe immediately for disinfection, and notified all the customers who had visited his shop the day before.

However, he soon realised that things didn’t add up and became very angry. He found that the date of diagnosis and the date the employee informed him about it were incorrect and confronted the employee about it.

Here’s how the conversation went: 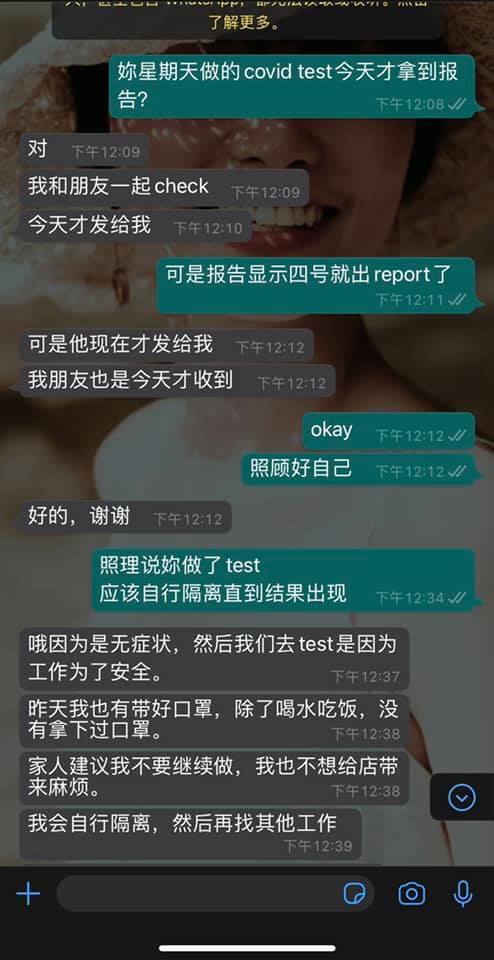 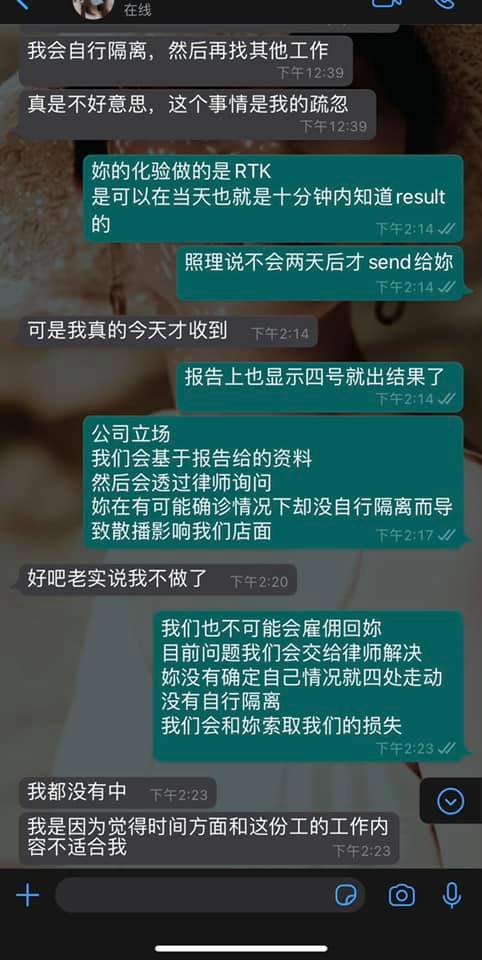 The cafe owner then referred to the ‘Covid-19 report’ that the employee had shared with him and questioned her about it. 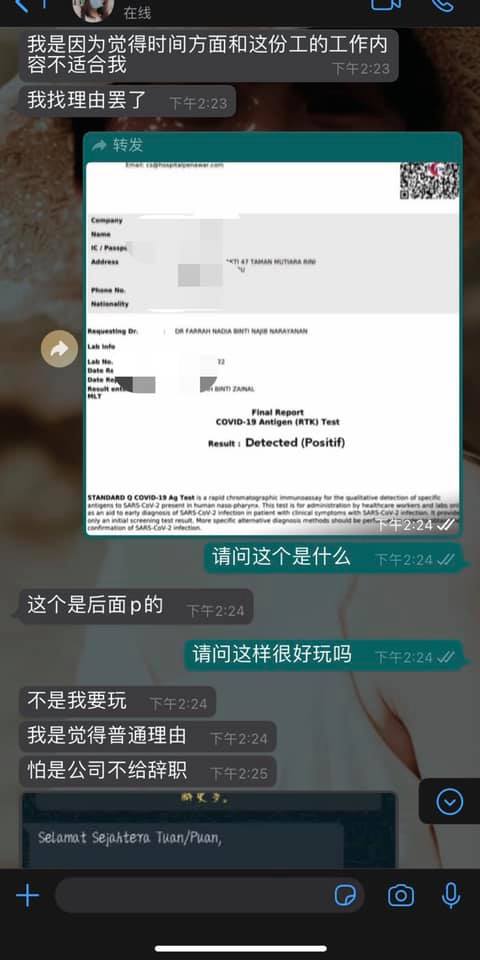 The girl then showed the ‘negative test results’ that her friend had edited for her. 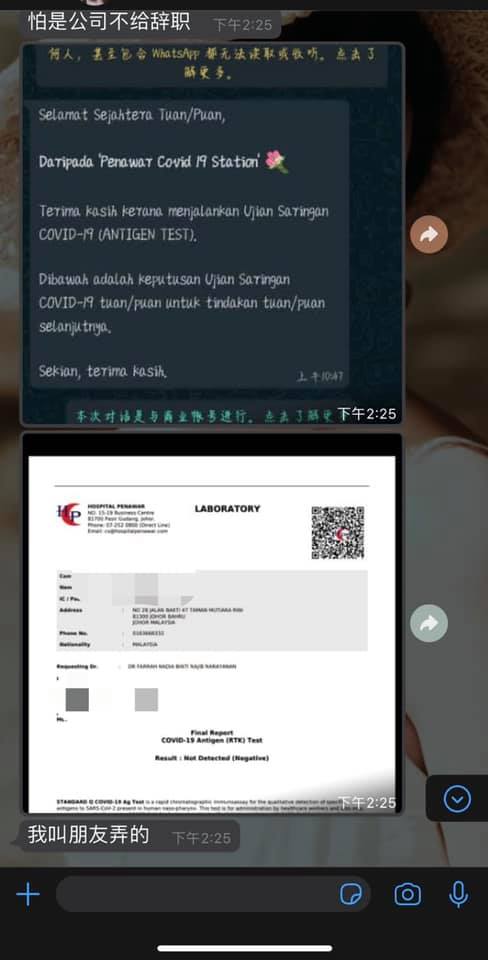 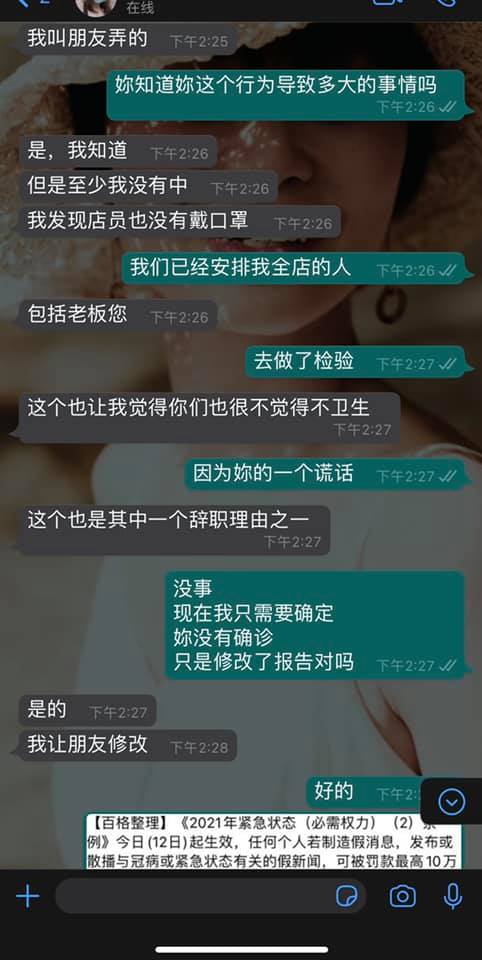 The cafe owner said he couldn’t believe the employee was able to joke about the situation when everyone was still recovering from the effects of the pandemic outbreak. He then decided to call the police and make a report.

He also decided to call the girl’s parents and tell them about it. However, her father did not think his daughter did anything wrong.

“When we met, she justifiably said: “I told you that it was fake!” Her perspective blows my mind!” the cafe owner wrote.

According to Oriental Daily, Iskandar Puteri police chief Assistant Commissioner Dzulkhairi Mukhtar confirmed that a police report was made and that the case will be investigated under Section 420 of the Penal Code. However, he said no one has been arrested yet.

Upon conviction, the accused can face up to 10 years in jail, whipping, or a fine. 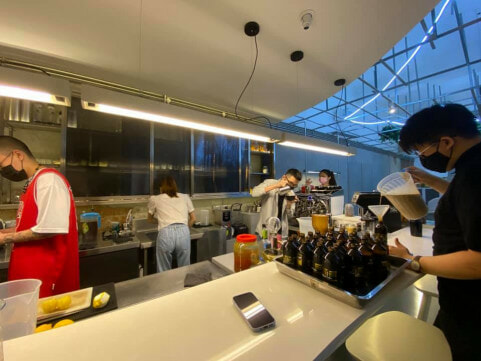 When interviewed, the cafe owner said he regretted that the incident happened. However, he emphasised that he did not deliberately want to exaggerate the matter, but wanted to remind young people and the general public that this kind of behaviour should not be ignored or accepted by society.

He also advised other employers that if they receive a Covid-19 report from their employees, they should verify the authenticity of the report.

He addressed the screenshots of the conversation he posted on Facebook where the employee said that other employees did not wear masks, which was the reason why she wanted to leave. He added that if her allegations were true, he would have been caught by other customers a long time ago.

Also read: “This Is a Childish Excuse” Boss At KL Company Denies Employee’s MC & Orders Him To Come To Work 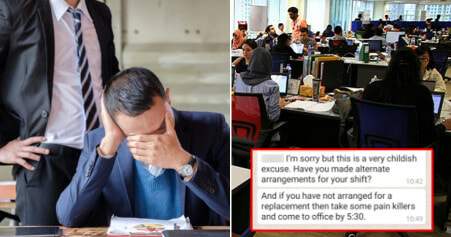