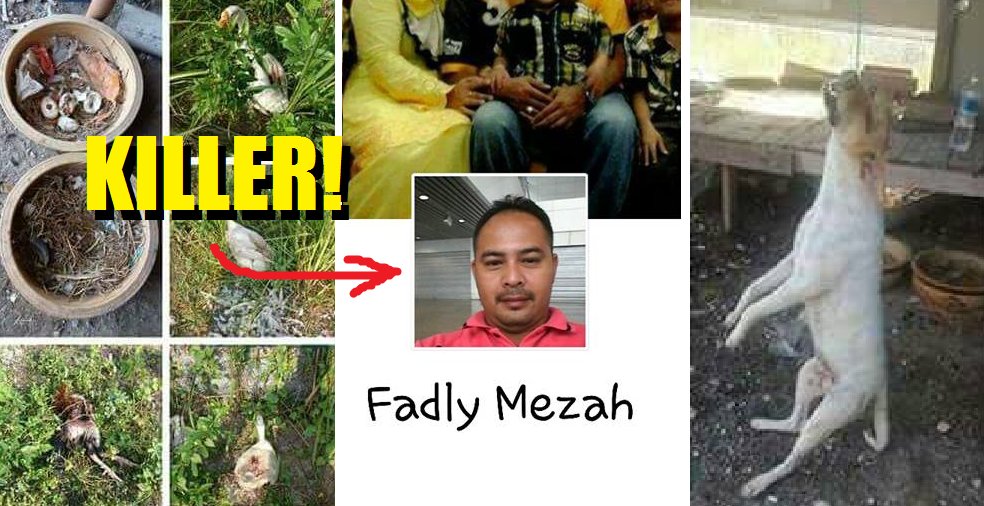 It’s crazy to think that there are psychos in the world and Fadley Mezah happens to be one of them.

The man from Banting, who currently resides in Kuala Lumpur posted a horrifying picture of a dog that is hung by it’s neck.

He posted the photo along with the caption, “Penjenayah di hukum gantung sampai mati..” which translate to “Perpetrator hung to death.”

The man had the audacity to lightheartedly take a few pictures just for laughs. And yes, it’s safe to assume that he was the one behind it. He then uploaded the pictures to Facebook group “Kelab Penternakan Itik dan Angsa, Malaysia”.

His reason for doing so is because the dog entered his compound through a hole in the fence and then attack his chicken and ducks.

According to his Facebook profile, he works in Malaysia Airports. The photo circulated quite rapidly due to his very cruel act on the dog and Malaysia Airports even released a statement on the matter.

After Malaysians discovered his photos and lashed back at him, the man deleted his Facebook profile. Unfortunately for him, screenshots of his post and Facebook profile were taken so he can be famous, or more like infamous.

It’s terrifying to think that this is a married man with three children (as seen in his cover photo) and it disgusts more people to wonder what his children could pick up from their father.

We really hope that this is the only animal abuse and cruel act he has ever done. Though most would beg to differ.