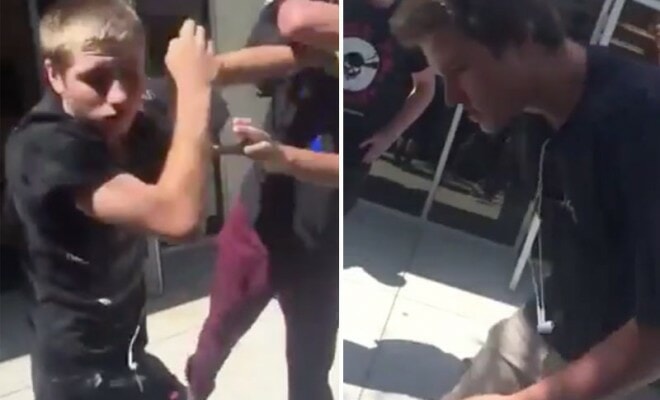 Karma is a very dangerous thing and sometimes, it is served back instantly.

A video released on Youtube yesterday made its round on social media and with great reason too!

The footage shows a high school bully punching a blind kid in the face. However, he immediately got his just deserts when another guy came in and beat his ass right back.

The hero, known as Cody, can be seen jumping into the scene to save the day. He came at the bully by trying to throw a punch but knocked him to the ground instead.

No mercy is given to the bully who was left to bleed on the sidewalk.

“You trying to jump a f*cking blind kid, bro? What the f*ck is your problem?” Cody shouts.

When the bully’s friends help him to his feet, Cody warns the him: “I swear to God, if you f*ck with this kid again, I will f*ck you up.”

Netizens all around the world expressed their disgust at the bully’s friends who tried to defend him, and also other people who stood there and didn’t try to help the blind kid before the young hero came in.

Huntington Beach Police are investigating the fight, which they called “an isolated incident involving these three students,” but haven’t yet announced any charges.

Huntington Beach High School officials are still investigating the incident, and would not comment pending an official statement.