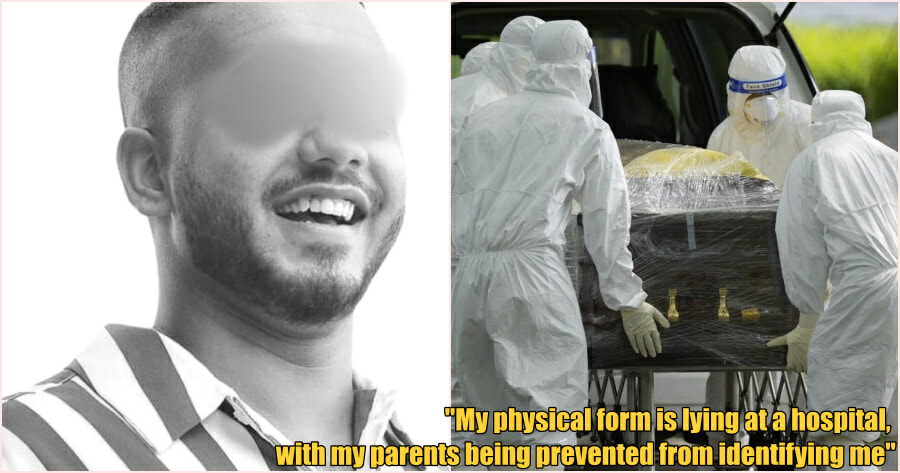 Malaysians have often taken to social media to get their pleas out there for public support and to get the attention of people who can help. Previously, a Malaysian had taken to his Facebook to plead with the public to help him find his biological family

Recently another online plea has made rounds on social media. The online plea which was written in the first-person perspective of Sean Jayabalan who had passed away was posted on his sister’s Instagram page. 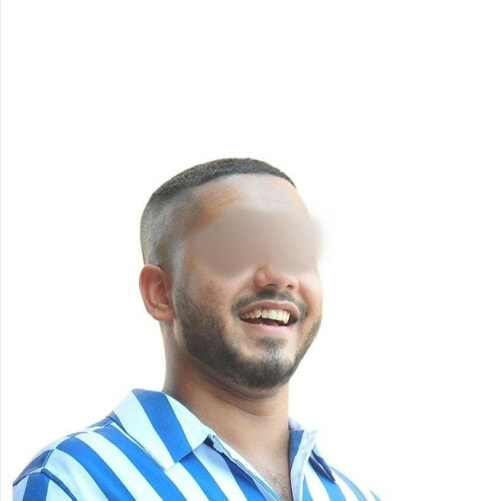 The plea said, “Dear relatives, friends, brothers and sisters, my humble apology for departing unannounced under this present circumstances.”

“My untimely departure am sure is a shock to everyone but I sincerely hope the truth as to what transpired on the morning of the 26th Oct 2021, around 12.30am shall prevail.”

The post allegedly stated that “My physical form is lying at a hospital, with my parents being prevented from identifying me and the timely post mortem not being conducted by the authorities to conclude the cause of my death is stressful on everyone.”

“Furthermore the verbal insistence by the hospital that I am Covid-19 positive contradictory to the attached reports would be painful to bear and highly stressful too,” the post alleges. 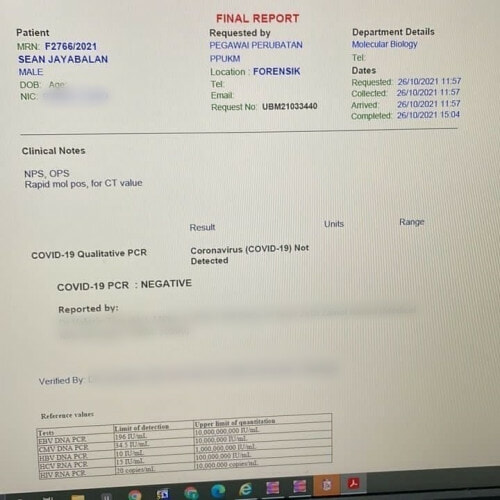 Based on the first police report made by their father, Sean was taken to the hospital after a car accident in the late night/early morning of 26th October.

“I am not satisfied by the reason given by the person in charge of the hospital’s mortuary and forensics department for not conducting a timely post-mortem.”

It also stated that “I am deeply saddened with my son’s demise and the long of hours of wait brings more devastating trauma to my family.” 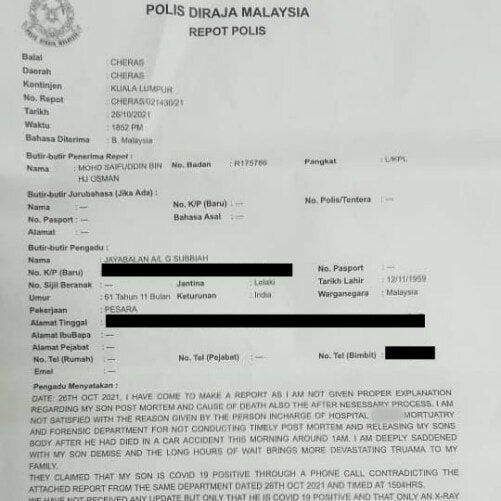 More police reports were made against the hospital

“But there again he was duly informed that the hospital has jurisdiction as to its own operations and conduct.”

“My father has made another police report (police report 4) on 28 October, seeking clarity as to the circumstances and reasons of my death and undue delay by the hospital in processing the release of my physical form for which I am disappointed,” it alleges. 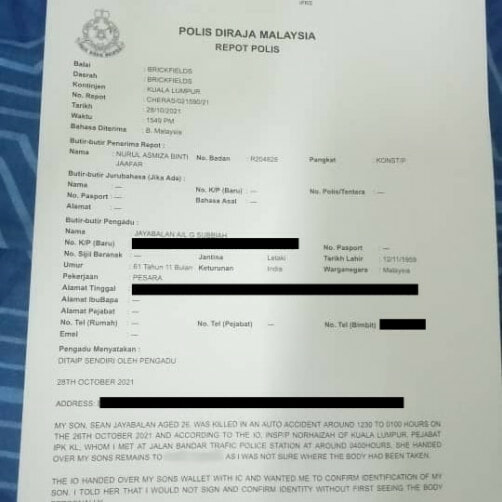 Furthermore, the post claims that the hospital had attempted to derail the efforts of the deceased’s parents in this matter by trying to induce the district health office at Lembah Pantai, to quarantine his family because of the prior close contact with him.

“They without substantiation continues to claim that I am Covid-19 positive and frustrate my loved ones’ efforts and request to provide an appropriate and proper send off for my mortal part.”

“My humble and sincere thanks to everyone for giving me the opportunity to share this life’s journey,” signed off Sean. 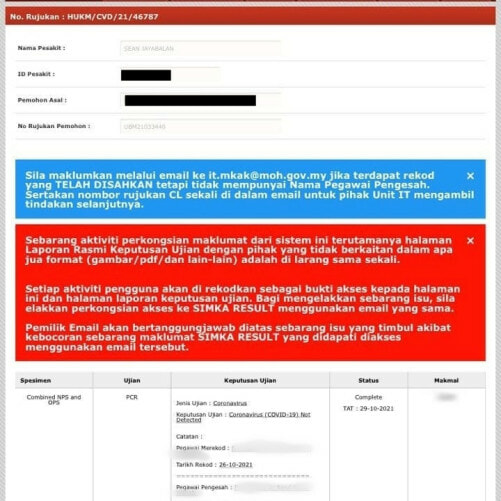 The original post was published on 28 October. Since then, there have been a number of posts by Sean’s sister, Kavisha Jayabalan, who has provided some updates on the situation.

In a post yesterday, it reads, “The police investigating officer called this afternoon and informed the family that we could finally collect Sean’s mortal remains from the hospital without any conditions and proceed with the final rites.” 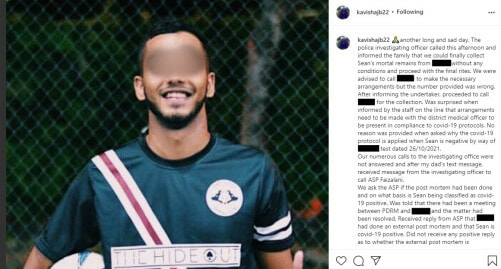 “No reason was provided when asked why the Covid-19 protocol is applied when Sean is negative by way of the Covid test dated 26/10/2021.”

“Where is the credibility of the hospital being an accredited hospital when they can claim that our family had been extended the opportunity to see the remains when no such offer ever took place,” it alleged.

Fortunately, in the latest post on 1 November, it is reported that Sean’s family will finally be able to access his body to identify him through his face.

“The meeting with the chairperson and PDRM at the hospital took place this afternoon. They claim that there was a Rapid Molecular Covid-19 test done on 26 October which states that there was Coronavirus detected.”

“Based on this, the hospital is claiming Sean is positive. However the hospital has offered to allow four family members to view only the face and to proceed with the cremation under Covid-19 protocol and SOPs,” it reads.

The post which is presumably written by Sean’s father stated that “I know that we are being railroaded but under the prevailing circumstances and my wife’s mental status. I am inclined to accept the offer and get at the least some extent of closure.”

“It is very painful and I shall continue to seek redress, justice for Sean. Thank you,” it concluded.

According to a post today, Sean’s funeral is to happen today (2 November). The post which was written in the perspective of Sean said, “It’s been cold and lonely. Missing all of you already but about to start the next phase of my journey. My heart felt appreciation to everyone for being there for my family.”

“Pa, please ensure that you get the justice that I deserve.”

We hope that a complete investigation will be conducted by the relevant authorities on the matter. We would like to offer our sincerest condolences to Sean’s family.

WORLD OF BUZZ has reached out to the public university hospital and is waiting for comments. 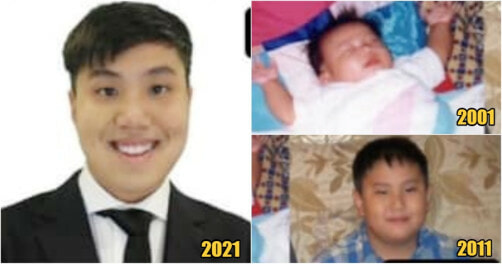