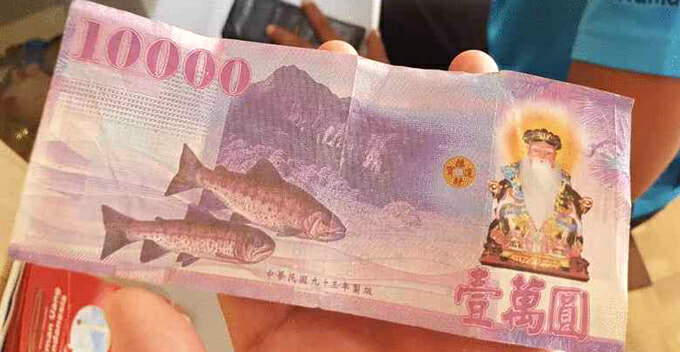 Lightning never strikes the same place twice, unless you’re this guy who runs a money changer.

A few days ago, this money changer owner from Sandakan, Sabah had the shock of his life when a customer showed up with a piece of hell note. He thought he’d never come across such a spooky incident again, but that’s not how the universe works.

The next day (27 March), the boss was visited by one of his regulars who excitedly produced a few pieces of foreign currencies, and one of them turned out to be…. a hell note, again.

According to the boss as reported by Sinchew, the guy deals with pre-loved clothes and he would occasionally find foreign currencies in them. And when that happens, he would go to that money changer and change them into Ringgit Malaysia. This time, he had come forward with a few pieces of Korean Won and Taiwanese Dollar notes.

During the verification process, the guy suddenly asked the boss about this particular piece of note, saying that he’s reluctant to let it go because it’s rare. The note in question is a piece of “Taiwanese Dollar” with the denomination of 10,000 and it has garnered the boss’ attention because he has never seen one before. So he asked the guy to show it to him and to his surprise, the money turned out to be a hell note with a Chinese deity printed on it! 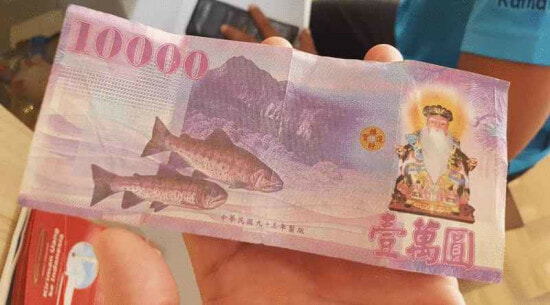 Since yesterday’s encounter was still fresh in his mind, he immediately enlightened the customer about the truth and urged him to hand over the note so it can be burned according to Chinese tradition. Plus, it is also not advisable to keep hell notes in one’s wallet for obvious reasons.

Well, we don’t know what’s up with this money changer but we sincerely hope that this is the last time the owner will ever have to go through such a situation. If you missed out on the earlier story, check out the full article below!

Also read: M’sian Money Changer Gets Shock of His Life When Woman Wanted to Exchange a Hell Note 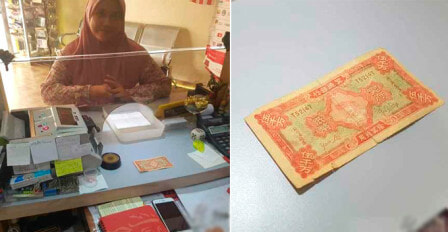