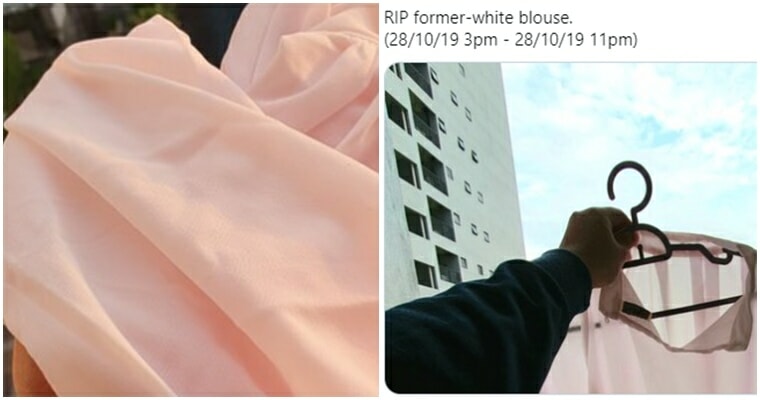 Okay, confession time! How many of you hubbies out there have accidentally messed up your wife’s outfits, but you’ve never (and will never) come clean about it with your wives?

If you haven’t, and you think she’s never found out about it, you should be thankful that she let it slide because there is no way she wouldn’t know about it. Especially if it’s a brand new, shop scented piece that she just bought.

So in a way, this guy, Adli Amirullah, was already half dead when he tweeted his laundry mistake on Twitter. The tweet gained so much attention that it gained 7.9 retweets and 6.4K likes.

“Guys, I need help. I accidentally washed my wife’s new white blouse with a red one. And now the white one is pink! I haven’t told her this yet. I’m trying to solve it first. HELP!”

Guys need help. I accidentally wash my wife's new white blouse with his new red's blouse. And now the white blouse became pink! I have not told her this yet. Trying to solve first. HELP

Here’s the worst part – she doesn’t have any other white blouse.

Thankfully, netizens are always there to help and someone told him to soak it in a Clorox mixture!

The tension arose as wifey started to ask for the blouse.

And it’s time for the last resort as the Clorox has failed! 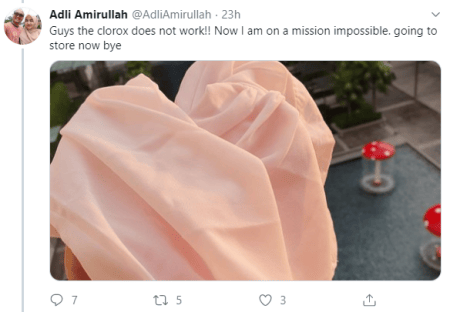 So off to the mall he went.. 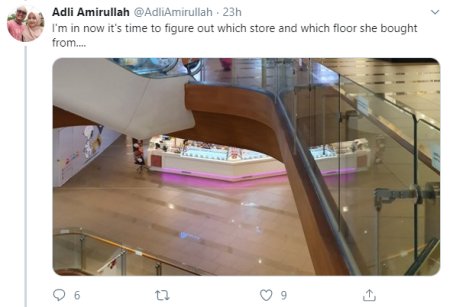 “The blouse was tagged ‘Polly Collections’ and I thought it was from Padini. So I circled around and literally scanned each shop until I stumbled a random booth that was selling clothes and found it! Not to mention that this was the last piece!! Thank god!!” 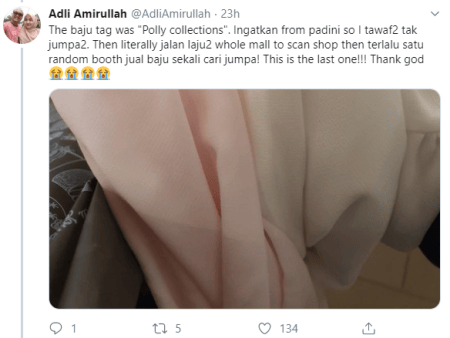 Mission accomplished! But how was he going to explain the pink one? He could try to tell her he bought her a pink version of her blouse, but the Clorox odor was too strong and he had to come clean. Which he did, but now he has to comfort his sulky wifey who was angry because he didn’t bring her along to the mall. 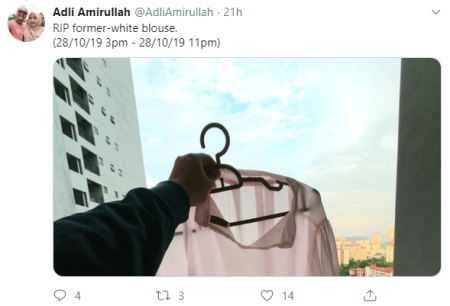 He is really a good husband though, he did the laundry and went through all the trouble to keep his wife happy. Well done! Seriously just tell your wife first next time.

Also read: “Most Loving Husband”, M’sian Lady Shares How Her Husband Did Chores & Prep Baths After She Gave Birth 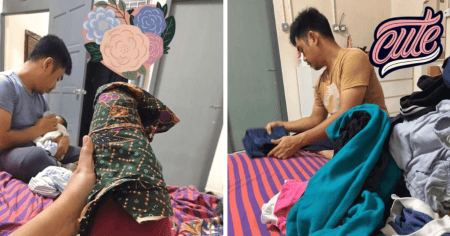