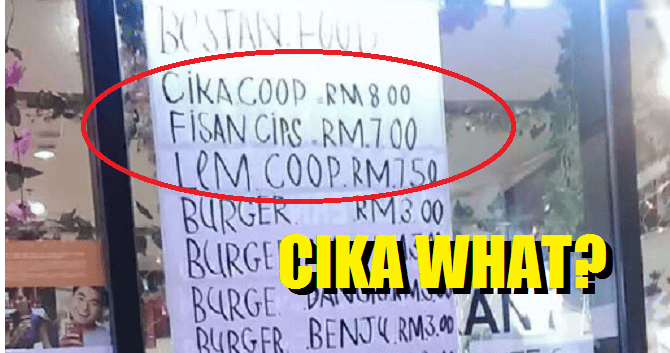 An image of a food menu allegedly taken from a cafeteria of a Malaysian university has been posted online and going viral!

The menu had the header “bestan food” assuming it’s “western food” indicated what the restaurant sold, and boy were they out of this world.

Among the ‘bestan food’ that were there, first up on the list was ‘cika coop’ followed by ‘fisan chips’.

I don’t know about you but boy do they sound out of this world!

The food written in menu is apparently spelt as it would sound, badly. So whoever wrote this had either really bad English or a good sense of humour.

If you stumbled across this menu for the first time, you’d wonder what ‘Cika coop’ and ‘Fisan Cips’ mean. Then you’d realise the rest of the menu is just the same.

Yes, ‘cika coop’ is presumably ‘chicken chop’ and ‘fisan cips’ is most likely ‘fish and chips’.

Netizens who saw the photo wondered who exactly wrote this menu and if the person who did it knew exactly what they were writing!

Some ridiculed the menu mentioning how embarrassing it was to display such a thing in a higher learning institution. Others speculated that it must be a joke because it was that bad.

A user commented saying “I go to stalls and restaurants for food, not for the literary quality of the menu. So this wouldn’t bother me.”

The image was first sighted by NST on social media forum Reddit that was uploaded by user ‘eccentricjack’.

According to stats, Malaysia actually ranks highly in terms of English proficiency, being second in Asia only behind Singapore in the EF English Proficiency Index (EF EPI) 2015.