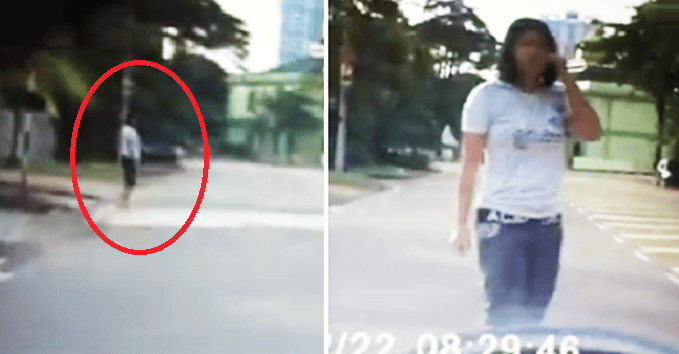 The ‘fake accident scam’ is a popular trend in China, as people would sue the driver for compensation for ‘causing the accident’. It happened so much that the Chinese stopped caring for people who appear to be in trouble.

But now, this ‘trend’ seems to have spread to Malaysia.

Just today, a netizen who goes by the name of Stef Koh, posted her dash-cam footage showing a lady who tried to pull off the similar stunt on her. However, the lady who was an amateur ended up embarrassing herself when she failed very very VERY terribly.

According to the footage, Stef was cruising along Jalan Molek 1 in Taman Molek, Johor Bahru at a reasonably low speed.

As she was cruising along the road, a lady wearing a white shirt can be seen standing still at the roadside.

But when Stef was approaching her, the lady abruptly ran into the middle of the road and stood in front of the car. It seems that she wanted to be hit by the car so that she can rip some money off the driver. 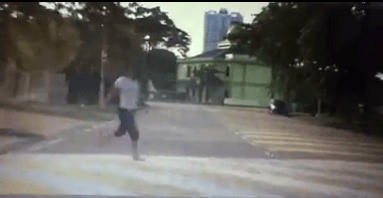 Luckily, Stef was already slowing down for a bump ahead when the lady rushed out. The car slowly came to a halt in front of the lady, leaving ample space between the car and the ‘victim’. Oppss…how ar now?

Standing in front of the car, the lady scratched her head as she didn’t know how to react.

The driver then drove around the victim and went on her way. I don’t know about you but I would’ve definitely question this girl’s bizarre behaviour.

Of course, some wondered if this girl might be trying to attempt suicide. Thoughhh judging that she was doing it in a residential area, it’s quite unlikely.

Watch the amazing performance from the girl here: