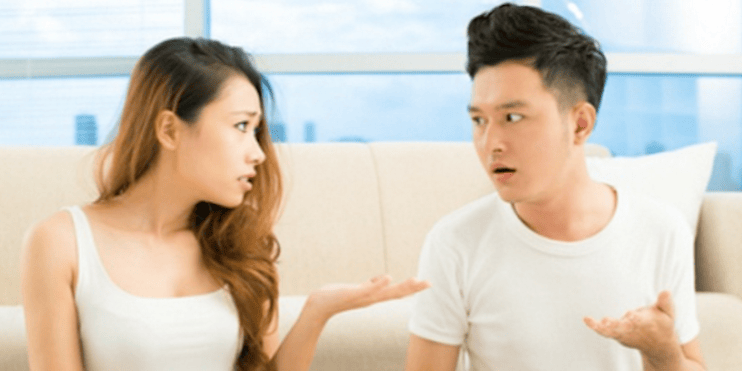 Every couple isn’t perfect, we’re human after all. So the occasional quarrels are bound to happen, and when they do, sometimes it’s just plain hilarious.

Recently, an anonymous girl took to a Facebook confession page to write about her very unhappy anniversary with her boyfriend. What started off as a happy day soon turned upside down for the couple.

“I want to share with everyone how I felt while celebrating with my boyfriend our first anniversary. So the story is, my boyfriend bought a new ‘Civic’ one week ago. Like any other day, he came to my house to pick me up, we were laughing and talking throughout the journey, the whole atmosphere was great.

Halfway through the drive, there was a sudden loud bang. It seemed that he overlooked a big hole in the middle of the road and because he didn’t have enough time to avoid it, the bottom of the car was scratched.

My boyfriend immediately got quiet. He turned into a whole new person.

Concerned, I asked him “what’s the matter?”. He’d tell me “nothing”, but his eyes appeared to be a little red. Throughout the journey, whenever I talked to him, he’d reply with only one sentence. The atmosphere now is so cold. He totally did not behaved like my usual boyfriend.

When we got to the restaurant, my boyfriend who is a big eater, only ordered one set of food! Even so, he couldn’t finish that!

I got so mad and kept asking him if everything’s ok, but he’d just tell me there’s nothing wrong.

And just like that, it marked the end of our first anniversary.

After I got home, I whatsapp’ed him asking him again what’s the deal.

He tells me his heart is feeling really hurt and really heavy.

I told him, “I never did you wrong though”. But guess what he replied me?? “This type of pain is worse than thinking about you cheating on me.” He tells me his ‘wife’ is hurt.

That MOFO! I got so pissed. Now, I know that his car is much more important than me. Before he could say anything else, I ended our call. Afterwards, he kept calling me but I didn’t feel like picking up.

Guys, please let me know if a car to a man is really that important? He can still call it ‘baby’ here ‘baby’ there!!!

I don’t see you calling me ‘baby’ even when we are having sex together!!! Tell me know if I did any thing wrong??” 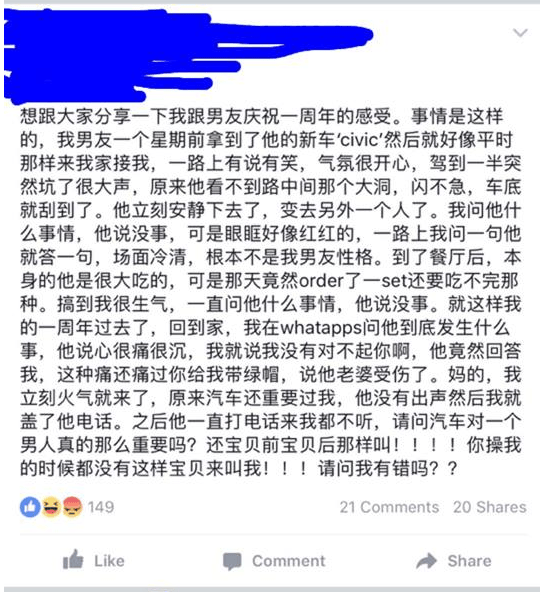 Netizens were thoroughly amused at the predicament this couple was in. While most took the side of the girl, saying that the boyfriend is taking his girlfriend for granted, there are many others who could emphatize with the boyfriend as well.

“Wow, he actually said that if she cheated on him it wouldn’t be as painful. Maybe she should give him a taste and see if it really would not be as hurt.” one netizens wrote.

“Although what he said was a little ‘over’, but if you just bought a car and got it damaged within one week, I’m sure you will feel the pain of your boyfriend.” another commented.

“Both the girlfriend and car is equally important. If you got into an accident and the girlfriend is ok, the guy will still be upset over the damaged car!” one argued.

“To be honest, I’ll be more concerned over my girlfriend. At least cars can be fixed. I would rather trade in my car for a girlfriend.” said Mr Desperado.

What do you guys think? Is how the boyfriend acting justifiable? Let us know in the Facebook comments!