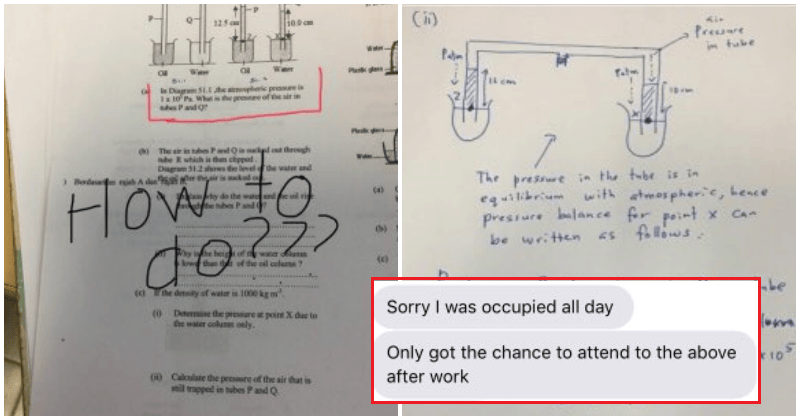 Though they may not have a full grasp of the subject matter, it is still the thought that counts.

One netizen took to Twitter to tell her touching experience. She shared how her father helped her with Physics despite having a very busy schedule.

In her status, @zirwatulqistina shared a photo of her text message exchanges to her dad. She writes, “No matter how busy, he still finds time to reply, ily dad.”

Despite not being able to tend to his daughter, @zirwatulqistina‘s father did his absolute best by doing the equations she needed for her.

He wrote the equations, drawings, and even explanation for her! He deserves a ‘dad of the year’ award man!

The tweet which showed the extent a father would go for his kids was well-received by netizens, with another netizen recalling a funny story of the experience she had asking help from her own father, who is a lecturer himself. But the response she got was totally what she didn’t expect!

@nayliiiiiiiii captured the funny image of her conversation with her father:

“Dad help me on how to do the graph inequality if the numbers look like this.”

Her father responded, “Do not disturb me after office hours. It is past 5pm already.” 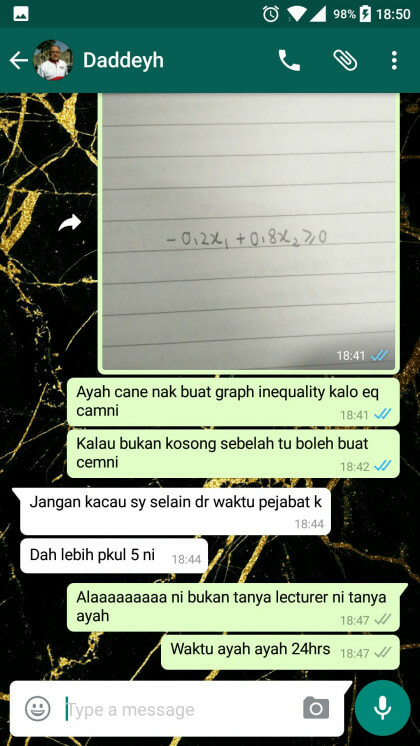 She responded by saying that she was not asking the father as a lecturer, adding that a father’s time is 24 hours.

Kudos to all fathers out there. Have you showed your appreciation to your dad recently? 🙂

Also read: Dad-To-Be Uses 2,000 Blocks of Instant Noodle to DIY a Playhouse for His Future Baby 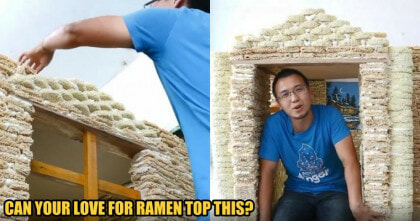