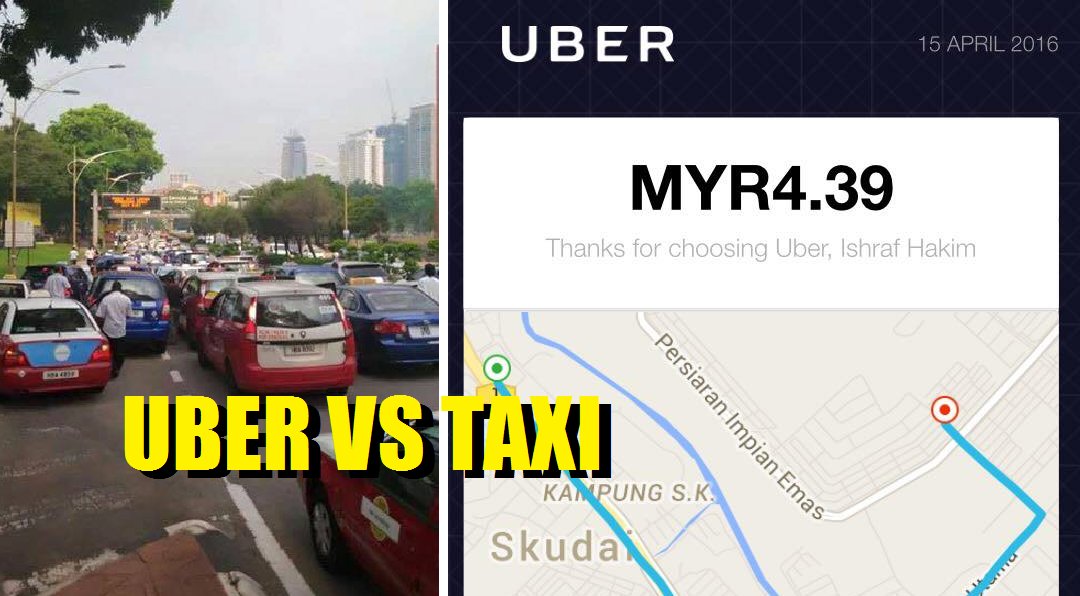 There’s been a huge commotion between taxis and UBER/GRAB for months now. After the introduction of UBER and similar apps to the Malaysian market, taxi drivers see a big plunge in their income as Malaysians rather choose to ride in an UBER.

This caused some taxi drivers to cause a scene and even protest by parking their vehicles in the middle of the road, creating massive traffic jams.

Hakim recently published a status post on Facebook, describing his experience with a taxi driver. Hakim wanted to give taxis a shot, thinking they have changed their notorious behaviours of ripping passengers off, but to his disappointment, things were still the same.

“Lately I’ve been taking Uber a lot as my car is still in the workshop. Last night I was from KL and the bus dropped me off at Skudai Parade. I saw some taxis were waiting for passengers. Thinking that they had changed/improved, I approached them and asked how much it would cost from Skudai Parade to my house.

They quoted RM15-RM20. So I asked them “Pakai meter tak boleh ke bang?” (Can you use meter?) They seemed irritated and annoyed by my question and told me that they have to take a long route to get back to Skudai Parade.

I walked away and requested for Uber. Guess how much it cost me? Less than RM5!

I thought wrong. They are still the same, despite the protest and the increasing number of Uber and Grabcar drivers. Overcharging, ripping off passengers and refuse to use meter. No wonder Malaysian taxi drivers are listed as worst taxi drivers in the world.

Please lah, improve yourselves, clean up your name. Stop telling us to “Cari teksi lain, dekat sangat.” or “Tak boleh, jalan jem.” Be polite. And that meter on your dashboard is not just a perhiasan.”

Hakim is far from generalising all taxi drivers and mentioned that he knows that there are some nice ones that will happily use the meter and charge the fares fairly.

“I know it’s not fair to generalise all of them. Not all are bastards. I really pity those honest taxi drivers who are just like us, trying to make a living.” he says.

Have a story to tell? Share it to us on [email protected] or drop us a message on Facebook and your story may be featured next!