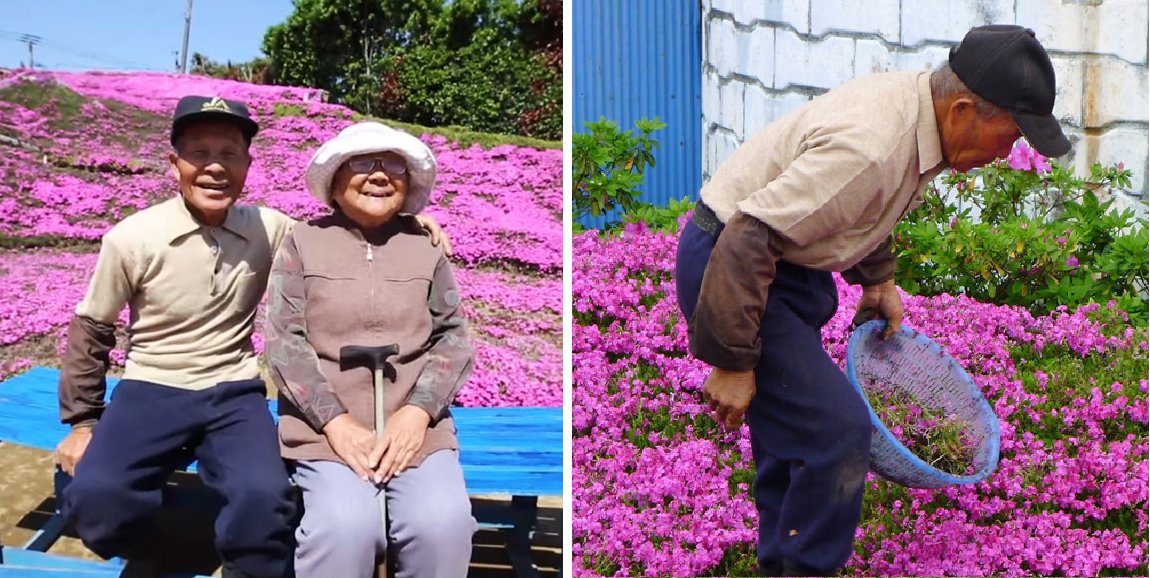 Meet Mr. and Mrs. Kuroki, an elderly couple who spent practically their entire lives together after being married since 1956. The two raised two children and lived as dairy farmers in the rural part of Japan.

The two would tend to their cows (60 of them) on a daily basis.

However, at the age of 52, Mrs Kuroki suffered from blindness due to complications from diabetes. As a result, the depressed wife shut herself away from the world and began living a life of seclusion in her home.

Saddened, the loving husband tried to come up with ways to bring back a smile on a face. He suddenly had a struck of idea when he saw a pink shibazakura flower in the garden and decided to plant a lot of them.

Mr Kuroki painstakingly worked to create the garden by chopping down trees and take care of the growing plants. To plant over thousands and thousands of flowers, so even without sight, his dear wife could enjoy their scent. But it was all worthwhile when they bloomed 2 years after. Their house was surrounded by a sea of pink flowers. It’s been over 10 years since the first seed was planted and his dream to put a smile on his beloved wife’s face came true.

Even though she can’t see anything, she still loves to be outside. Their beautiful pink garden that embodies the touching story of husband and wife tugged on people’s heartstrings. They get a lot of visitors who come see the effects of a man’s love for his wife. So even when you’re overshadowed with darkness, sometimes, it just takes one true love to bring light back.