Hello everyone who are addicted to selfies, you might just stop taking selfies after this.

Recently, an unfortunate Indian teenager had her hair caught by a Ferris Wheel while she was trying to take a selfie. But the most horrifying part was that the ride took her hair with it, tearing off her scalp!

The incident took place just outside of a college in a small city called Baraut which is located about 65km away from Delhi, India.

The alleged 16-year-old was trying to find the perfect angle for her selfies but got hazardously close to the bars. Her hair got tangled in the ride and her whole scalp was slowly pulled off.

Her friend, dressed in white, can be seen trying to console her while many men around try to untangle her hair. It is believed that the red stains on the friend’s clothes is her blood. 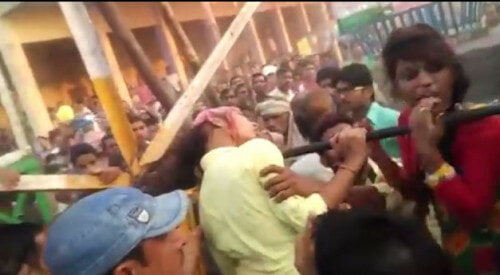 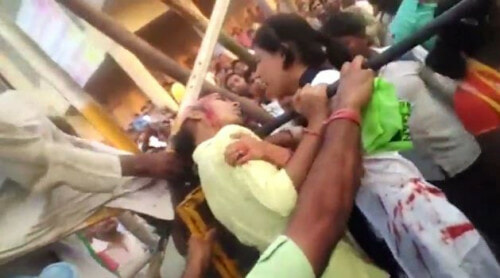 The internet definitely had a lot to say about this, but freakishly, a lot were jokes made at the poor girl!

“No one had a sharp knife of something to cut her free? Its a fair there should’ve been lots of cooking stales that would have scissors and or knifes to set her free. Poor girl I hope they can save the scalp and reattach it.”

“Nothing new I thought Indians were experts at scalping.”

“But first, lemme take a selfie!”

Why do people make inappropriate jokes all the time?!

Luckily, it is reported that the girl is recovering well and in stable condition right now in a hospital.

Watch the horrifying video here if you dare:

Safe reminder to watch where you selfie guys. Seriously.