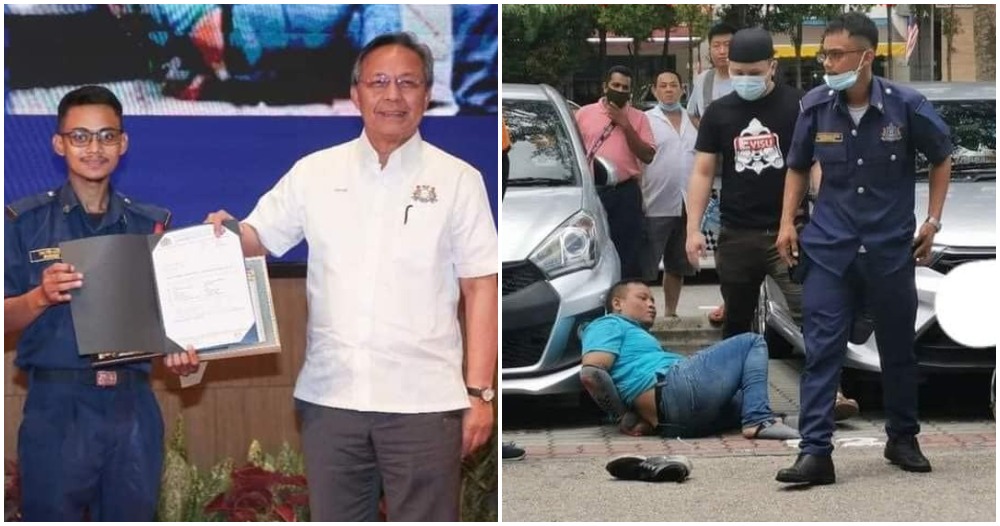 On 1 September 2020, a video of a man stopping a snatch thief caught the attention of netizens. Many praised him for his heroic act and lightning-fast response during the incident. Due to his heroic and courageous act, 26-year old Shazrin Hafeez Fadzlan received a certificate of appreciation along with RM1,000 cash and an offer to be a permanent public health assistant U19 in the MBJB. According to a post by Info roadblock JPJ/Polis, during the incident, the culprit was seen riding a motorcycle and forcefully grabbing the victim’s handbag. The terrified victim, a 30-year old woman screamed for help before Shazrin and a few other bystanders noticed.

The culprit was quickly stopped by Shazrin as he was the first to be seen arriving at the scene of the crime. Not long after that, other bystanders were seen assisting Shazrin with the situation.

The award was presented to Shazrin Hafeez by the Johor MB Datuk Ir. Hasni Mohammad during his visit to the new MBJB office.

Ever since the video went viral on the internet, Shazrin says that it has brought luck to his burger stall business. He also says that business has never been better since he opened the small business in Jalan Anggerik 40, Taman Johor Jaya three years ago.

A video was shared on Facebook showing Shazrin Hafeez at his burger stall. The owner of the video could be heard sharing the location of the stall and praised the officer for his efforts to help the snatch thief victim.

Astro Awani also reported that his burger business grew quite a significant number in sales. From selling 60-70 burgers every night, the numbers went as high as 200 ever since the video went viral.

What do you think about this? Share your thoughts in the comments.