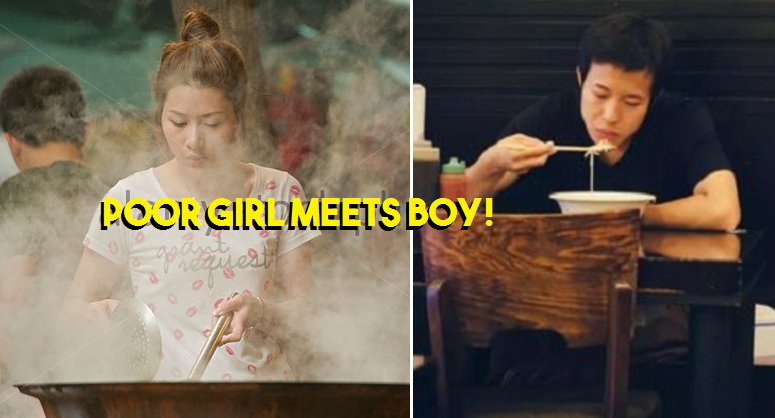 To take care of my sick mother and a brother who was still studying, I’d set up a small stall by the streets everyday. Having opening up two to three tables beside it, I was ready for business.

When business was good, I could earn up to about RM200 to RM300 a day. But when it doesn’t do well, all I have to bring home was my tired self. Who knew a poor girl like me could ever end up with a rich man?

He always came to my stall to eat. He never fails to order the cheapest bowl of noodles too. Sometimes we’d even talk for a bit, usually him asking me how much I’m earning and if my business was doing well etc. He dressed in simple clothing and would everyday walk to my stall to eat. I never thought he was a rich man. In fact, I thought he was very poor, and probably even lazy that’s why he’d rather eat a cheap bowl of noodle than to cook for himself.

Until one day, he asked if I had a boyfriend.

I said to him, “I’m so poor. I have a mom who suffered from stroke and a little brother who is still studying. Who would want me?”

He very casually said, “I would.”

I was stunned for a bit. I didn’t agree to that ‘proposal’ but since that day, he would come to my stall exactly at 6pm, sometimes even helping me out. On a Chinese valentines day in 2013, he didn’t come. I thought to myself, “he probably is on a date”. Yes I was feeling a little sad but I didn’t blame him. To my surprise about 8pm, he came while holding a bouquet of roses and confessed to me. Just like this, we were a couple.

He invited me over to his house a few times to meet his parents but maybe because I was stressed, I never got to it. Around April 2014, my mom’s condition has recovered a lot, then it was then that I agreed to go over his place and meet his family.

When we reached in front of his house, I was in shock. His house was like a mansion, and yet he never told me things like these!

I immediately felt like I can never match up to him and didn’t think that this relationship would last but he assured me otherwise. After we entered his house, his parents gave me a warm welcome. After we settled down only I realized I’ve seen his father before, around 2012.

He said his father has memory-loss symptoms due to his old age. Sometimes he’s alright, but sometimes he’d become ‘lost’. There was once when his father went out but didn’t come home for a few hours. Apparently he has forgotten his way home. He was hungry at one point that under clouded judgement, he sat and ate someone else’s leftover noodles at my stall. He tells that I didn’t scold him, in fact, I had given him a new bowl of noodles too. After he sat at my stall for a few hours, I curiously asked why he did not leave only to find out that he was lost. I then sent him to the police station.

Who knew such simple act would’ve made my whole life turn around? Could this be fate? The father who after that went home mentioned about me to his family, hence his son coming to my stall to eat my noodles.

At first his son, who is now my husband, intended to visit my stall to give me some money as gratitude. But he liked my cooking and after getting to know me more.. well, here we are!

As of now, I’m having a good life. My husband takes good care of me too. My little brother has finally graduated and as for me, I’m pregnant! The hardship I’ve endured over the years seemed like a small price to pay for the blessed life I am having now.

I’m writing this post dedicated to my husband. I just want to say: “Thank you, my beloved.”