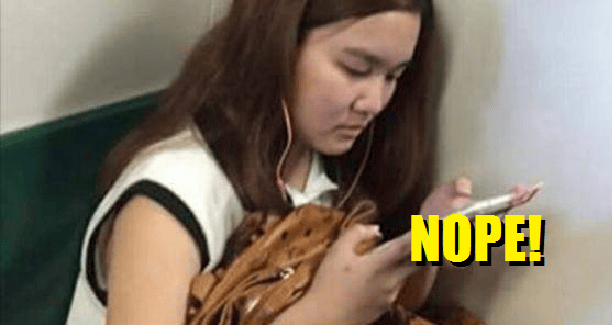 A recent post posted to allsingporestuff got citizens riled up after viewers read the story about a rude girl who refused to give up her sit for an elderly man.

A contributor who shared the story mentioned that he/she was in a crowded train when he/she realised that there was an elderly man who didn’t have a seat.

When motioned a lady to give up a seat for the tired old man to sit, instead, what she said horrified everyone.

Was on the north-south line today on a Friday evening, the train being crowded as usual.

Uncle got up at Toa Payoh. (Or was it novena)

Okay la it was around 630pm, I noticed him cause I thought he looks like my ah gong so cute with white hair kind, and partly cause he was looking a little tired.

So this spoilt brat here, lets call her A, was on the phone when he stood in front of her,

Since she’s on the phone, I thought maybe she never notice him so let’s give her the benefit of the doubt, (I mean sometimes when I’m deep in thoughts, I also cannot pay attention to my surroundings), so I tahan until she puts down her phone which is almost 10mins later at Yio Chu Kang.

I gestured to the Uncle and asked if he’s okay and wanted to sit, he just smile and shake his head (so poor thing cause he kept fidgeting and I know he PAISEH)

I politely told A if she could give up her seat for Uncle and here comes the awesome bit…..

“I PAY ADULT FARE WHY SHOULD I GIVE UP MY SEAT?!”

Is this april’s fool joke?

Honestly I don’t think people like this ever exist,

if you know her please do her well by telling her that this is not cool, next time you also will be lao kok kok and this world will be much better place if everyone just looks out for each other right?

And if I ever see you again, I’ll make sure I give up my seat to you

People who read the story were shocked at how rude or inconsiderate the person was. The fact that she said no to giving up her seat to an tired elderly man surprised everyone.

Some joked that she’s sitting because she’s an ‘OKU’ due to the lack of use of her brain.

We probably should just sympathize her.