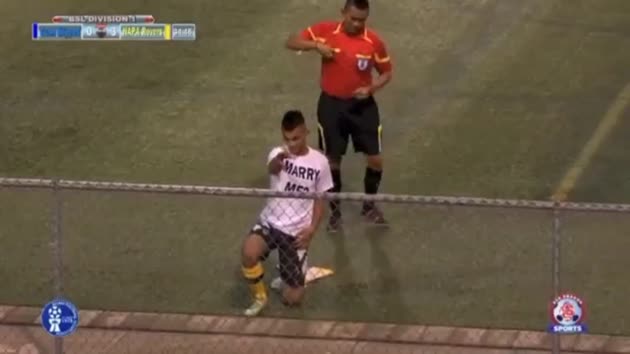 The Budweiser Soccer League Premier Division in Guam is currently in Week 8 and things seem to be heating up. Just recently the striker for Napa Rovers, Ashton Surber scored an excellent bicycle kick goal against rival team Gam Shipyard last week. But his superb kick was overshadowed by what he did after that.

He proceeded to celebrate his victory by popping the question to his girlfriend, La’Kiesha Pereda, right after the goal. Surber ran to the side of the pitch and took of his jersey to reveal his white undershirt. To the surprise of his girlfriend, his undershirt was printed with the words “Marry Me” . Swoon! 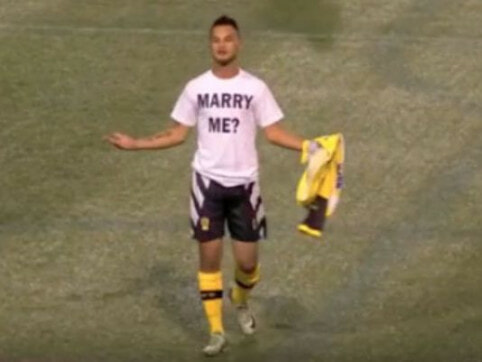 Looking at La’Kiesha Pereda, he got down on one knee to propose to her. At this romantic moment, the referee took out the yellow card to show to Surber as FIFA regulation states that a player can be cautioned for removing his shirt after scoring a goal as it is considered unsporting behaviour. However, Surber continued with his proposal by pointing to his girlfriend who was seated in the stands and kissed two fingers in her direction. 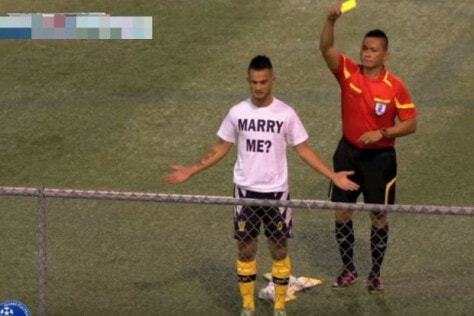 It was a double win for both Surber and the Napa Rovers as they scored 5-1 and took over the top position in Guam’s division while there was a happy ending for the couple as reports said that Surber’s girlfriend said yes to his romantic proposal.

Congratulations Ashton Surber and La’Kiesha Pereda on your engagement!