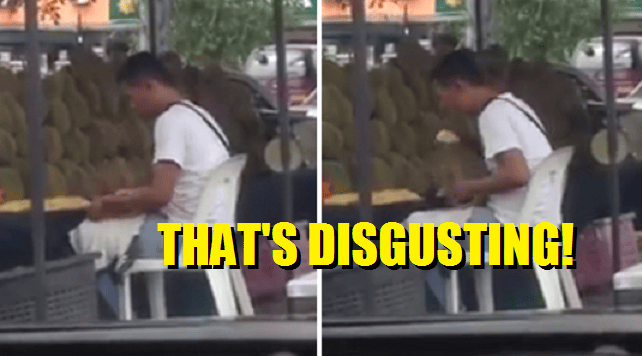 A video ‘featuring’ a durian seller just went viral. What he did in that video is going to leave your tummy churning.

Durian is a fruit most Malaysians love. Don’t even get me started with those delicious creamy texture. Unffff!

However this one video will forever scar our minds, making us be very careful of the place we choose to buy it from.

The video shows a durian seller going about his daily job of packaging durian. While doing that, the man shockingly takes each packet of durian, and before he wraps cling-film over it, he holds the exposed fruit closer to his face and does what seem like a spitting motion.

This guy didn’t just do it once, but for every packet of durian he packaged!

It was believed that this Durian store is located in Taman Sri Gombak and was said that it’s been operational for more than 10 years.

Some netizens commented that he may just be blowing dust away, while many others mentioned that his head motion looks more like he’s spitting. Either way, it was agreed that what the man did was very unhygienic.

The widespread video has gain the attention of authorities and they are currently conducting investigations on the incident.

“We will call the stall owner in to investigate on this matter. If he is to be found guilty, actions will be taken against him.

Currently there has been no police reports lodged and no suspects in custody. Police patrolled the area of business but it seems that the store is closed/gone.” Chief police officer, Ali Ahmad said to Harian Metro.