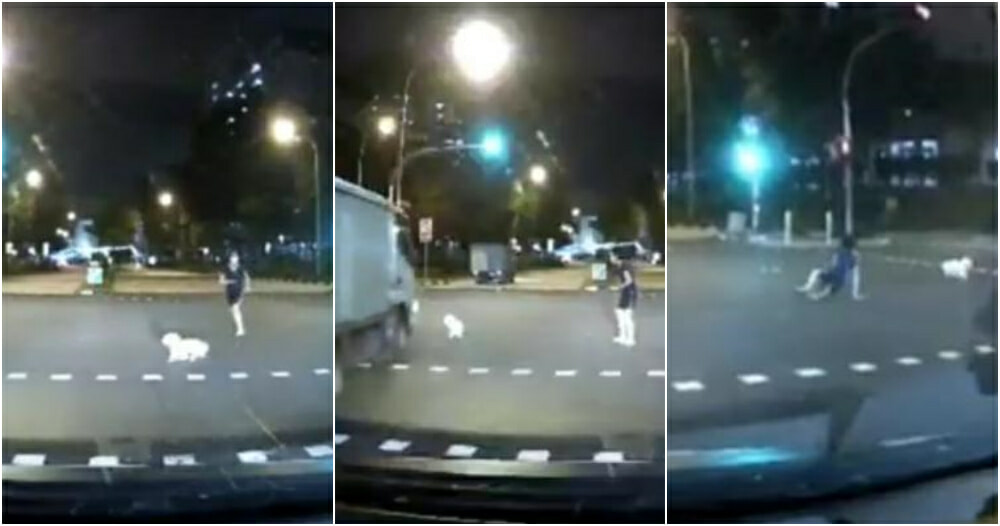 If you own a pet, one of your biggest nightmares would be your pets running away as it a pawrents duty to keep our fur babies safe!

A video recently caught our attention after a car dashcam footage was posted onto Facebook showing a frantic owner chasing after her pet doggo in the middle of a road junction at Choa Chu Kang, Singapore.

The video was posted by a Singaporean netizen, Hang Zhi Cheng, who managed to capture the whole incident as his car was stopped right before the junction.

In the video, it can be seen that the traffic light at the junction had just turned green and vehicles started to move forward. Zhi Cheng, however, had to pull his car to a halt when he noticed a little doggo running in circles right in the middle of the junction.

The owner of the dog was seen chasing right behind and was struggling to capture the playful doggo.

While the owner tried to chase after his dog, it made a turn and ran away, causing it to move towards the other lane where a speeding lorry was about to make its way.

Thankfully the lorry driver honked at the dog which frightened it, causing it to quickly turn back. The poor owner stood there frozen!

Passersby come to their rescue but…

At one point, the exhausted owner fell on the road. Passersby even came to help the frantic owner but they too struggled. To the doggo, everyone wants to play!

Two men stood at the junction to help control the traffic flow while the rest tried to corner the dog.

Zhi Cheng shared an additional video with World of Buzz to show the crazy fiasco caused by this playful doggo.

At the end of the video, the group still did not manage to capture the dog but was able to usher in onto the sidewalk.

And so the chase continues…

We hope the owner managed to capture her doggo and that the doggo is unharmed!

Also Read: Survey: 40% Of People Would Give Up Their Doggos To Keep Their Phones