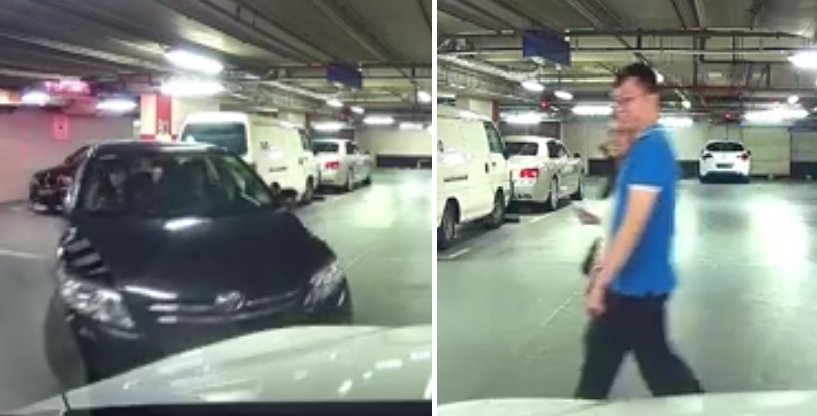 Being a decent person is basic and should be practiced by everyone. However, these days it seems like being a good person is too difficult for some people.

An example of terrible people would be this couple who accidentally bang a car and still had the audacity to laugh at their crime!

Beh Chia Lor – Singapore Road posted a video of a couple from Singapore hitting a parked car while they were trying to park. Now, netizens are demanding that the horrid duo be caught and sued.

The lady, who was driving the Toyota, was trying to park her car inside a parking lot. However, she misjudged the distance and ended up knocking into the white car.

She immediately reversed and parked properly. Then, she came down and noticed that the damage was pretty bad. So, the irresponsible driver quickly moved their car to a different parking spot.

Yes, instead of owning up to their mistake, they just moved away as though nothing had happened.

And the worst part of it all was, they even walked right in front of the victim’s car and LAUGHED!

They turned back a few times while casually strolling past to check out the damages they’ve inflicted. But instead of showing remorse or even fear, the couple just smiled and laughed.

Thankfully, their behaviour was caught on camera and netizens now are demanding that the horrid duo be caught and punished immediately.

Meanwhile, other netizens are making fun of their demise as their faces and car number plate was caught.

“I believe both of them saw this video everywhere in social media and I’m 100% sure they can’t smile/laugh as how they were in this video.”

“And now everyone else is laughing at their misfortune. Hahahaha!”

“Siao char bor, your driving skill sucks! You still need to pay for what you have done. Everyone is having a last laugh at you now.”

Realising that the damage is serious, the lady quickly removed the car elsewhere. Then they re-appeared, laughing at the victim's misfortune as they strolled casually past the car.(Video Credit: Daniel)