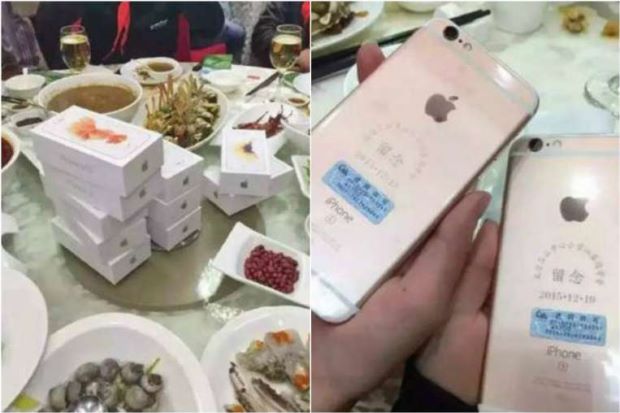 A man in eastern China has given each of his 39 primary school classmates a rose gold iPhone 6s at a reunion on Saturday, a local newspaper reported.

The 40 former classmates were enjoying a dinner for their primary school gathering in Ningbo, near Shanghai, on December 19 when suddenly boxes of iPhone 6S were placed in the middle of the dining tables. The iPhones were rose gold in colour and had words carved on the back of it.

Each phone, which costs at least 5,288 yuan (RM3,517) were engraved with the words “Beilun Sanshan Primary School Class of 1998” to commemorate their past.

According to the report, the giver was a businessman, identified only as classmate Zhang. We also wished we knew what business he’s doing.

“He is not showing off his wealth by being so generous,” said one of the former classmates. “He is a good man who cherishes the bond between classmates.”

However this is not the first time a Chinese tycoon bought ex-classmates iPhones. Last year, businessman Qian bought his former classmates iPhone 6 with the inscription, “Class of 1992, Maoshan Middle School”.

Any of my primary school friends out there who has become rich? Any body? No?