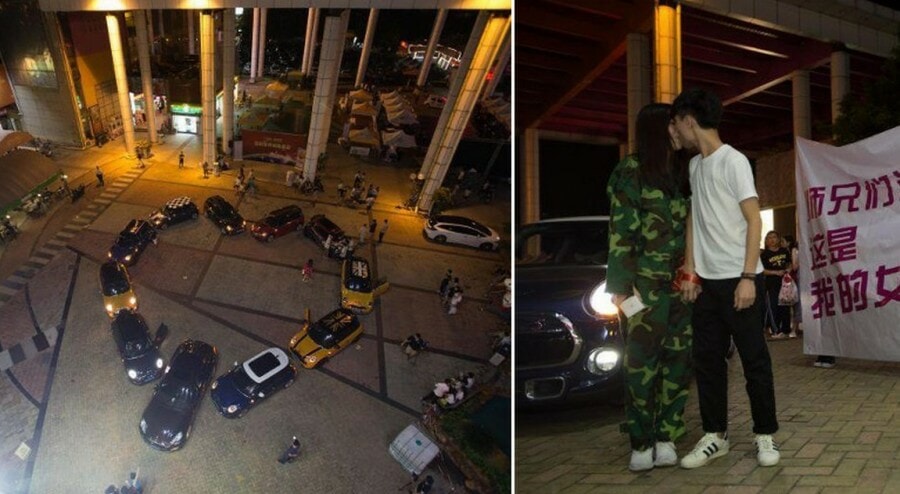 A guy in China decided to propose to his college girlfriend and thought up a really creative and balling way to do it. 11 fleet of luxury cars parked into a shape of a heart!

The boyfriend who is from Guangzhou, China is reportedly a young entrepreneur who was previously dropped out of university. No, he doesn’t own all the cars, but the dropout did earn enough success as a CEO to rent all 11 of these luxury cars.

Apparently the couple dated sine junior high school, where they fell in love with each other during military training.

He came to impress with his flashy wedding proposal to win her over and make sure no one steals her away.

The girl who is just a freshman in university, was lured to her dorm’s balcony by the sounds and horns of the cars. She was awed by the sight and came down stairs to be met with her boyfriend.

The sweet lover then got down to one knee and proposed with a diamond ring.

Then again who wouldn’t? Ammirite?

The newly engaged boyfriend confessed that his lavish proposal was a way to seal their love in case someone tried to steal her away from him while she was in school. The lovebirds are set to wed after she finishes her studies.

Truthfully, one would wonder if her “yes” was for the luxury cars or his love. Then again, who are we to judge?

Let’s hope it’s a happily ever after for the two.