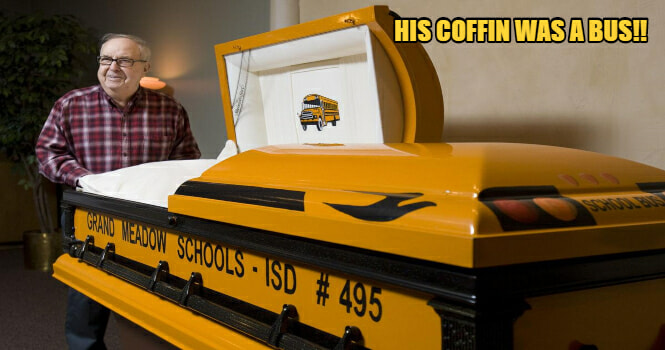 A bus driver of 55 years passed away and his burial casket is a school bus!

Glen Davis was a bus driver for 55 years of his life in Minnesota, and it was the one thing he was most passionate about. Based on a report by CNN, he drove around generations and generations of school children and had never once gotten into an accident. Five years before his passing, he received a gift from an owner of a local funeral home named Jim Hindt; a burial casket in the exact design of a school bus, with the number 3 (Davis’ bus number) stamped on it. Davis loved it. In fact, in 2015, he said “Oh, good gosh, I cried a few times.”. 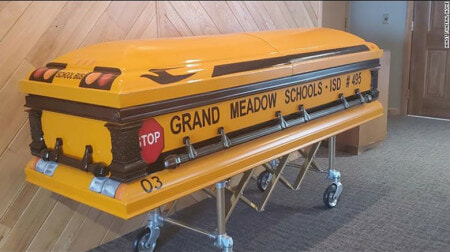 What an extraordinarily unusual gift!

Hindt gifted it to Davis because he was so touched by how Davis comforted his family when Hindt’s daughter was diagnosed with cancer at 18 months. When his daughter grew up cancer-free, he was so grateful and decided to thank him with it.

Even though Davis’ daughter thought the gift to be morbid, Davis was all about it. 5 years later, he is being buried, in the very same (kinda) bus that he drove town for most of his life.

Isn’t that just the cutest story ever??

Also read: Elderly Couple Reunites at the ICU Possibly for the Last Time and Our Hearts are Breaking 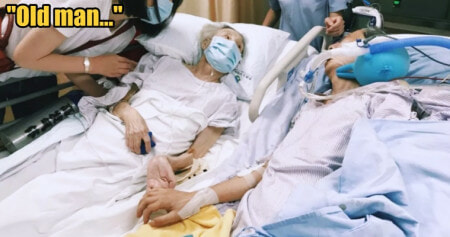