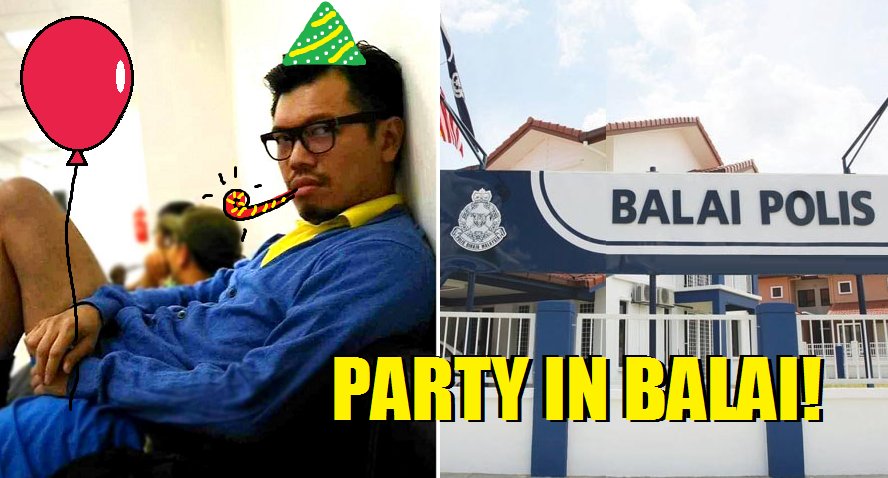 As you scroll along your Facebook feed, you’re bound to stumble into some pretty interesting stuff. Facebook has become the outlet for most people to express whatever they are feeling with their friends and even public.

Pang Khee Teik, Founder and Director of Art for Grabs shares to everyone his experience last Saturday evening where he was arrested.

“I was arrested last Saturday evening and I regret to say it was not for being too gay.

We were at Publika for KL Alternative Bookfest ( KLAB 2016 ) + Art For Grabs which I organised. It was our little indie party. Things were quiet at the start but picked up after Dr Mahathir launched his book at 3pm. As the organiser of the bookfest, I had to join the publishers to greet and walk with the former prime minister. While walking in, one of the guys from the publishing company told him that a recent book fair did not allow them to invite him, but that I was cool about hosting him here. It took a gay man to give this man a platform to express himself!

Some time in the evening, I was making my rounds. At Fahmi Reza’s booth, Pik-Svonn Lew had packed their merchandise and was about to lug her bags to the car. But she was going alone and was carrying two bags. I offered to carry one of her bags. I asked comic artist Arif Rafhan Othman from the booth behind them to accompany us.

At the carpark, as soon as I put one bag into the boot of the car, half a dozen men surrounded us and asked for our ICs. After making us open the bags, they went through everything, asking Pik-Svonn to identify each item. There were some stickers with a clown face on it. They also asked about some tshirts. But there were none to be found. I felt sorry for them as I thought they wanted some tshirts badly.

Then they asked all three of us – Pik Svonn, Arif and me – to follow them to the Sentul police station. It was as if something urgent happened back there and they needed our help. Perhaps they were throwing a party and their party manager absconded with their party’s budget and now all the guests have arrived and they have nothing to wear for the party. Or they could not afford to hire a clown and are forced to make do with clown stickers.

So they put the bags back into Pik-Svonn’s car and we were told to get in. An officer joined us in the passenger seat and told Pik-Svonn to drive. He seemed like a nice guy. He has been in the force for 28 years. The pay is ok but the hours are not good. He was in the middle of a family dinner when he was called away to greet us. We offered our sympathies. How tough it must be to be taken away from your family so suddenly!

Not long after we arrived, Fahmi was brought in too.

The police station looked new and impressive from the outside. Inside it was endless corridors of white walls and fluorescent lighting. There was so much waiting around it felt like we were at a mausoleum where time goes to die. There was no art on the walls, no balconies with nice views, no nothing. But there were two massage chairs in the corner. One female officer fed it one ringgit and we watched her vibrate like a stressed atom in a particle accelerator. I said, it must be rough to be working such hours and commiserated with her.

Later, Pik-Svonn, Arif and me were taken to a different room. One senior Indian officer passing by looked at me, stopped and asked, are you from Melaka? I said, yes, how do you know? He said, I talked to you before. Then I recalled he was the officer investigating me during the ban of Seksualiti Merdeka in Nov 2011. He asked how my parents are and if they are still in Melaka. I said they are well, and no, they are in PJ. How nice of him to remember!

At one point, a muscular officer in tight jeans stepped in. It was so distracting. A female officer said, wah, abang ni dah sado! Another female officer agreed, ya, memang dah sado. Abang polis sado then said, badan kena jaga sebab muka dah camni. Then the second female officer said, ah, you try lah SK-II, dapat dari kedai Korea, ada diskaun. My heart broke for them. I saw that the police are just the same as us: they just want to be attractive and to be loved. If only they had someone to advise them how to be loveable. I felt I had to offer my advice. Sebenarnya, I said, SK-II ada line laki, tapi jangan beli SK-II for men – ia akan keringkan kulit jer. SK-II biasa tu lagi best, lagi pekat dengan bahan istimewa. Ye ke, the female officers said. Iyer, I said. I have never felt more useful as a gay man.

Later, they asked for our phones too, but not before allowing us to call our lawyers and friends. This was when we realised we are not invited, but arrested. Aiyah, such a bummer. One of them said to us, we are just doing our job, no hard feelings ya? I said, no hard feelings, I understand, it must be terrible you have to risk so much hate for what you do. Eventually they released us at 3am on bail, all four of us under investigation for Sedition. Even for helping a friend to carry bags. Wrong place wrong time. Sometimes being in Malaysia is like being at the wrong place at the wrong time.

So I tried to meditate. During my meditation I managed to calm down a little from the excitement of being invited here and the disappointment of learning I was arrested. Suddenly, between waiting to chat with an officer, and being finger-printed on all 10 fingers (twice!), I found the answer to the universe. Art is important. Our police stations need more art. Art that helps them reflect upon the meaning of life, helps them know what they want, and why they allow themselves to work in such a soulless and inhuman condition. I am happy to offer my services (for a fee lah) to do Art For Grabs + KL Alternative Police Station. I am sure there are artistic talents among these nice, kind, people who work here amidst such an oppressive environment. Maybe then they will learn to express themselves and fight for their rights too. Then we can party together. Screw the party manager, let’s party anyway.”