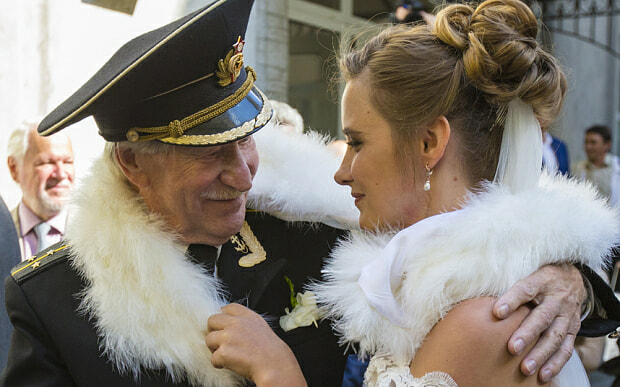 Not sure if sweet or creepy. 84 year old Ivan Krasko marries 60 year old younger Natalya Shevel who used to be his student.

The two lovebirds met while he was teaching at a university in St Petersburg, where the pair bonding over a shared love of poetry. Ivan confessed that he was impressed by her ability to write poetry.

“There were two lonely people, and they alone have decided to support each other,” the actor famed for his appearances in Soviet-era films said in an interview, putting people’s fascination and criticism down to the “question of sexuality”.

Krasko said, “For us it does not matter. I wish that Natalia could have a daughter, but it’s the dream of an elderly idiot.

“Simply, we need each other.”

Shevel is his fourth wife, following his last divorce in 2011 from Natalya Shchepinsky, who was 47 years his junior.

Krasko proposed by getting down on one knee and offering her a diamond ring on the St Petersburg metro.

She defended their relationship from criticism, usually from skeptics who didn’t not believe in their love. She described how they “gradually got closer acquainted” and she realised that she “needed” him.

“Anyone who loves and respects Ivan Ivanovich [Krasko] should love and respect his choice, be happy for him that he is well, that he still has some sort of life and that he can be happy. Why is that bad?”

He’s a true romantic,” Shevel mentions on the eve of their marriage. “If he thinks I’m cold he takes off his jacket and forces me to put it on. He’s always asking if I have got enough money to travel and gives it to me if not, looks after me, and brings me coffee in bed.”

Krasko said, “I feel like I am 23 years old… she is not a simple person but I find this interesting,” Krasko told Russian tabloid Komsomolskaya Pravda on the day of the wedding. “I have taken her under my wing. And I should have enough strength for the seven years that I have promised her.” 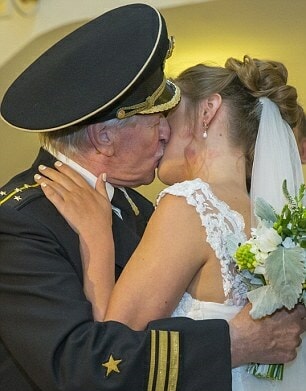 When a journalist implied the marriage was a publicity stunt by the young woman to shortcut the usual career ladder by linking herself with a famous fiance, Mr Krasko rejected the idea.

He said that it was a fact that she was currently unemployed but added he would not be attempting to boost her career saying: ‘An actor is always best off when they work on their name and by creating their brand on their own.’ He also promised his son that nothing in his will would be changed.