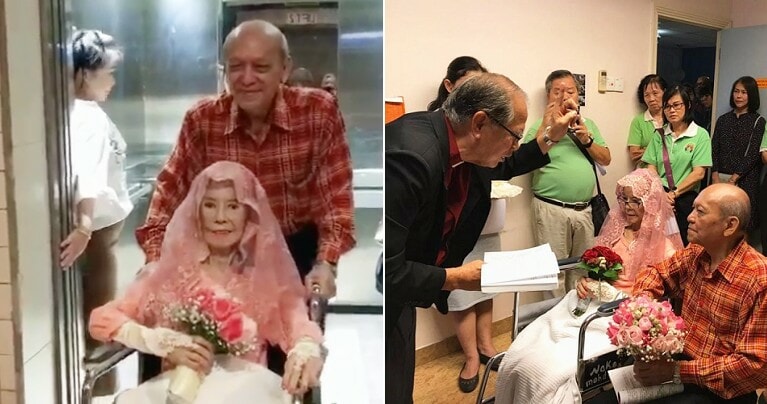 A 76-year-old stage four cancer patient’s marriage to her 80-year-old beau proves that love knows no time, age and boundaries. According to The Malay Mail, the simple yet sweet ceremony took place last Friday (11 January 2019) at Sarawak’s General Hospital, Kuching.

The video was later shared on Facebook and it showed Chan Teck Kong pushing Peggy Chai who was on a wheelchair into a room at the hospital whilst being accompanied by a bridal chorus played by a violinist.

In the room, the two lovebirds finally exchanged their vows after 30 years of being together. You can watch the heartwarming video here:

Speaking to Utusan Borneo, Chan told them that Peggy’s last wish was for them to get married. He was quoted as saying,

“I will care for her for the rest of her days. I love her deeply, words cannot describe my feelings.”

If you didn’t know, the couple met 30 years ago when Peggy signed up for Chan’s dance class. Their romance only started after Peggy lost her husband.

After that, Chan retired in 2015 to dedicate his time and energy to care for Peggy who was suffering from stage four ovarian cancer. Aww! Then, recently, about two months ago, Peggy was admitted into the palliative care unit in Sarawak GH.

“A few days before we got married last Friday, she told Father Wong who visited patients at the hospital regularly that she wanted to marry me. She had a lot of energy that day. I had gone out to buy things and when I returned Father Wong told me Peggy’s wish, I immediately agreed to marry her.”

Thus, Chan extended his gratitude towards the hospital’s doctors, nurses and staff, for putting together his wedding. He also thanked them for helping Peggy’s dying wish come true. Netizens who saw the happy couple also congratulated them and wished that they would live happily ever after.

Well, we’re glad Peggy’s last wish became true; and we also thank and applaud those who have made her wish possible. Kudos, guys! 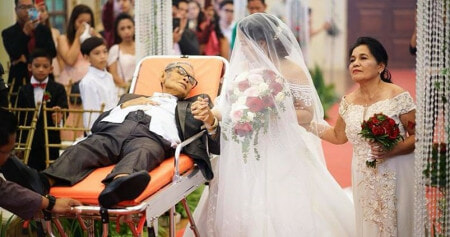