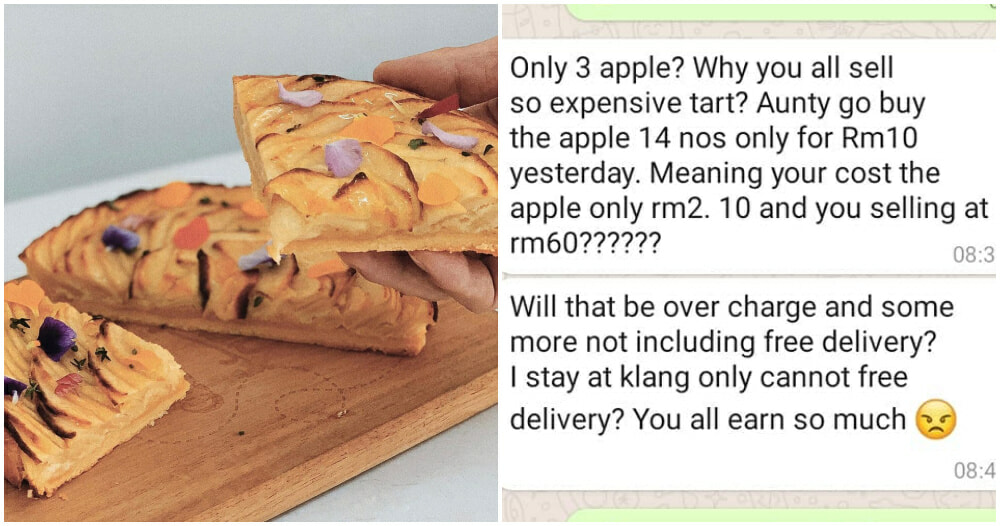 A Malaysian netizen, Jian Wei Khoo, took to his Facebook page on 24 July to share an incident he had encountered with a rather difficult customer.

Jian who is also a chef and co-owner of Pan & Wine Setia Alam told WORLD OF BUZZ that he decided to sell apple tarts during the pandemic as he believes people could use some sweet hand-made tarts to comfort them.

In his post, Jian shared screenshots of his conversation with a particularly difficult customer, who questioned the price of his apple tarts and tried to convince him to not charge her for delivery.

“Your apple got gold?”

The first screenshot is from WhatsApp where the customer reached out to Jian to place an order after coming across pictures of his apple tarts online.

She then asked him how many apples he uses in his apple tarts and how much would it cost.

Jian told her that the price of the apple tart is RM60, excluding delivery. He added that he uses three or more Granny Smith apples to make the apple tart.

The woman was shocked by the price of the apple tart, as from her point of view, three apples shouldn’t cost more than RM2.10. She claimed that the apple tart is overcharged since it’s not including delivery.

Jian remained calm and politely explained to the woman why the cost of the apple tart is high, to which the woman then asked Jian:

“Your apple got gold? Nevermind, aunty wants to order one for later 12pm.”

She also tried to convince Jian to waive the delivery fees as she claims she stays nearby, just within walking distance.

But when Jian did a quick Google search on the distance, it was not a mere short walk. In fact, it was 6.2KM away!

It would take an hour and 16 minutes for Jian to deliver the tart if he were to walk.

In the end, Jian had no choice but to politely reject her order as it was too last minute.

“We are pre-order base. All handmade. So, I just rejected her order politely,” Jian told WORLD OF BUZZ.

Jian’s post garnered over 2,100 shares, 2,200 likes and 950 comments, all of which netizens found the incident hilarious!

Also Read: “Why can’t you work?” Boss Forces Employee To Work On Public Holiday As She’s Working From Home 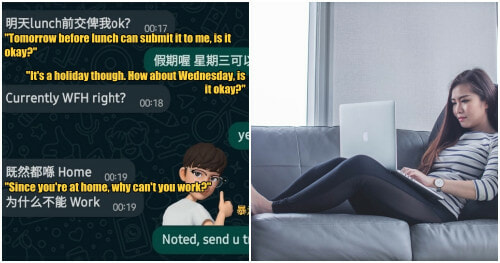