A video on Facebook that has recently gone viral captured how a dog owner in Johor punished her dog by hitting it with a rotan. The video garnered 200k views and counting.

In the 1 minute video, the dog pitifully looks up at the owner whilst it receives lashings of the rotan from the woman. The dog’s cries of pain is clearly audible as the woman punishes the canine. 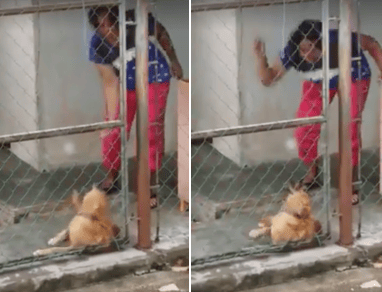 The cringe-worthy video is absolutely heart-breaking but apparently the woman was only punishing the dog for its own good??

The video, shared by Malaysia Independant Animal Rescue on Wednesday has attracted the scorn and fury of fellow dog lovers and concerned netizens online.

“This is not punishment ….this is torture

“Beating a dog is disciplining!!!??? Lame!!! That is not the right way n can never be accepted or tolerated pls. Action to be taken!” said another user Yasotha. 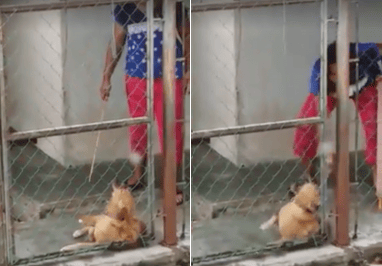 However, some netizens have taken a balanced view on this, mentioning that the use of the rotan as a disciplinary method by Asian parents is pretty common.

“Sometimes we treat these animals just like our own child. We love them but we treat them like humans. We canned them just like how we canned our child. Asian parents =D it is more pitiful that the puppy got no voice.” said Facebook user Reno Frankie Lim.

Others have lashed out against the person who recorded the video, for they could’ve intervened into the situation.

“To the person who recorded this vid, kindly go and stop this woman if you see her doing it again. I would definitely rush out and tell the lady to stop. I did that to my neighbour when she started hitting her dog with shoes.” said another user Chloe Yap.

However, Malaysia Independant Animal Rescue updates that the woman had beat her dog because her dog had the habit of chasing people and getting into fights with other neighbourhood dogs. She had beaten the dog to make sure it will “behave” in the future.

But get this – apparently, the owner and her family are very close to the dog, and “love the dog”.

“This case is settled. The lady beat the dog because it always tries to go out and chase people and fight with the neighbours’ dogs. The dog is very close to the owner. Thanks.
When we approach the daughter and the mother came out, the dog was walking around the house. The lady punished the dog to make sure dog will behave in the future.”

“When we were there to take the dog, she refused to surrender it. The daughter said the whole family loved the dog.”

“We are waiting for DVS to investigate. Police reports have been lodge.”

Netizens refuse to believe that the family’s relationship with the dog is as chummy as alleged, as the comments below show.

“I dont believe it that the family loves the dog, if they loved, they won’t beat it for reason” said Tara Sukari.

What is your take on this case guys?