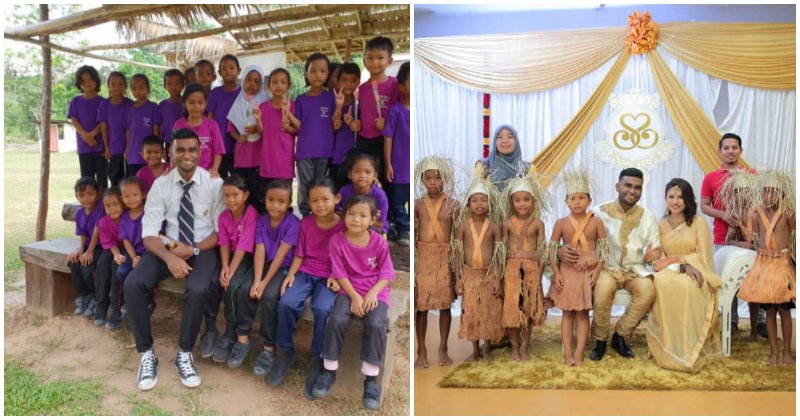 Remember the handsome teacher who went above and beyond his role to not only build an exciting learning environment for his Orang Asli students, but also managed to gain funding so that they could have the same facilities as urban and international schools?

Well, Cikgu Samuel Isaiah is now married! But fret not, for his ‘kids’ were not far from the celebrations because they travelled over 200 kilometres in order to be there for their ‘santa tuha’s’ (old man’s) for his big day!

Samuel took to his Twitter page to share how the adorable kids not only managed to attend his wedding, but also showcased their beautiful culture through their traditional costumes and dances for all the lucky guests in attendance.

My 100 Orang Asli Children and My Indian Wedding!!

The year 2017 was an eventful one for my wife and I as we tied the knot! Wohooo!! pic.twitter.com/xhyRWfEuPI

Samuel captioned the posting with, “My 100 Orang Asli children and my Indian wedding! The year 2017 was an eventful one for my wife and I as we tied the knot! Wohoo!”

He also mentions how much the kids wanted to be there for him even though the wedding was happening 200km away!

“The news spread like wildfire, and in no time almost every child in the school wanted to be at the wedding! On their own, all my children ultimately made up their minds that they were coming to my wedding,” explained Samuel in his thread.

The kids not only managed to attend, but they showed up in style, ready to celebrate their teacher’s big day by performing their traditional dances.

Everyone turned their heads towards a group of spirited and fierce looking Orang Asli children, hitting their bamboo sticks together as they marched rhythmically whilst making their entrance!!

IT WAS SO LIT I TELL YOU!!
(they were also ridiculously cute hahah) pic.twitter.com/FpcLnDrxe2

The kids put 120% into their dances, as the teacher described their performances as “powerful, moving and gave guests a glimpse of how amazing my children are.”

Of course, my children then stole the show, as I was beaming with pride. The performance by the children was powerful, moving, and brought guests to have a glimpse of how amazing my children are. pic.twitter.com/qwddnWuahd

“I will never ever forget my children as my life has not been the same since. My heroes have impacted my life in more ways imaginable and I am forever grateful. Thank you, children. I love you.”

Samuel’s only regret was the fact that at the end of the day, only 50 Orang Asli students from his primary school class managed to attend as he could only afford to rent one bus.

However, when he heard that his secondary school students also wanted to be there, he managed to get a few teachers that were coming down to ‘tumpang’ them while others managed to book their own bus tickets. (So much love these kids have for their teacher!)

It’s truly amazing to see how a teacher can not only instil the love of learning into his children but also build such a bond with them that it would have been incomplete without their presence at his big day.

Samuel shared his secret towards building such harmonious relationships with students as he does with his.

“I believe we need good pedagogy to teach. I believe in the pedagogy of the heart.”

Cikgu Samuel Isaiah’s posting has since garnered over 340 retweets.

Happy married life, Cikgu Samuel! And thank you for your lessons. 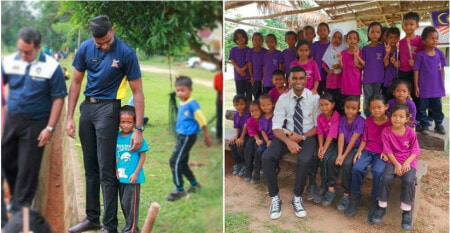