It’s that time of the year again, folks! Apple looks set to dominate tech news with a butt-load off new products starting with the new iPhones 7 and 7 Plus, TWO new earbuds and an updated Apple Watch!

They actually launched it a day earlier than expected because Amazon accidentally prematurely leaked it. Thanks Amazon.

One of the main talking points about the fruity new smartphone is the fact that it is now water and dust resistant! Both the 7 and 7Plus can withstand a splash but at the time of writing there are no IP ratings available. No information on it’s material choice yet but knowing Apple it’s probably some form of metal.

Apple introduced a new colour to their collection, Jet Black, which features a full glossy black coating instead of the usual matte. Other colours include matte black, silver, gold and rose gold (which looks a lot like pink).

One of the most discussed factor was, the fact that THERE’S NO HEADPHONE JACK!

Yeap, in keeping with Apple’s xenophobia towards ports, they have decided they don’t need the analogue audio jack and have ditched it entirely in favour of using the ‘lightning’ port which prior to this was used solely for charging. So yes, you won’t be able to use your earbuds and charge at the same time.

But if you want to do those two simultaneously, Apple has new wireless earphones that connect via Bluetooth called AirPods which are available at $159 (~RM645). Expensive sia. 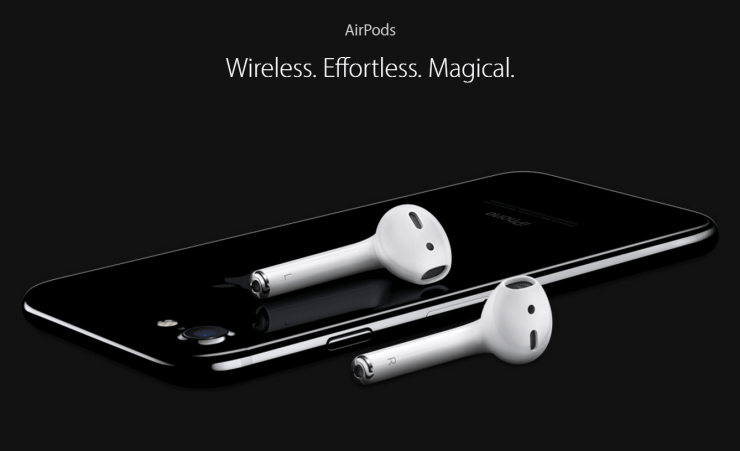 Another similarity is that the home button now supports “force touch” (sounds kinda rape-ish, no?) which is Apple-speak for it being pressure-sensitive (just like the screen) and that it’s no longer a physical button, instead it’s kinda like the OnePlus 2 where it vibrates. Commenting about this, Apple marketing chief Phil Schiller said the button will be “creating new feelings and experiences that could not have been created before.”

The main difference between the two is their size (duh) with the 7 sporting a 4.7″ display and the 7 Plus rocking a 5.5″ FHD display. It’s brighter than the models they replace, but with Android flagships coming out with QHD and 4K panels, it’s rather paltry.

The BIG difference however, is that the iPhone 7 Plus comes with not one, but two 12MP rear cameras! The 7 only has one plain camera. Why two you ask? Well it’s because one of the cameras is telescopic while the other has a wide angle lens on. They both fire simultaneously to give the illusion of depth in a picture.

By Apple’s estimate, the 7 Plus will have 3 hours longer battery life than the 7. There are no real-world tests yet to confirm this so take it with a dash of soy sauce, ya!

There’s no word on availability or price in Malaysia just yet, but expect it to be in stores sometime in Q4 of 2016. As for prices here are the off-contract US prices converted for ya!