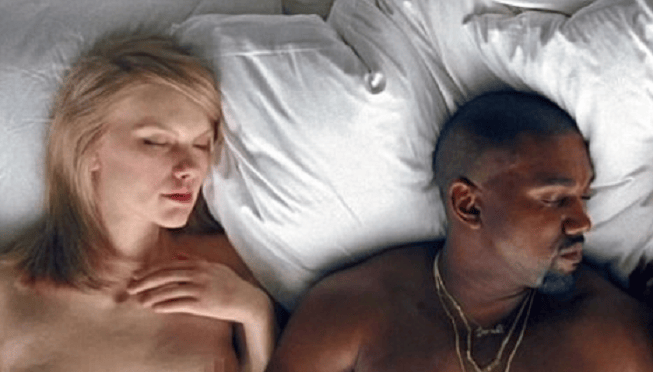 ‘Can someone sue me already’

Kanye West is back at it ladies and gentlemen! Whether it is because of his Twitter rant, or from his infamous back and forth feud with pop princess, Taylor Swift, Kanye keeps the cameras on him.

The rap singer has released the controversial music video with naked celebrities and politicians, all in the same bed with him in the center between long-time enemy, Taylor Swift and his wife, Kim Kardashian. 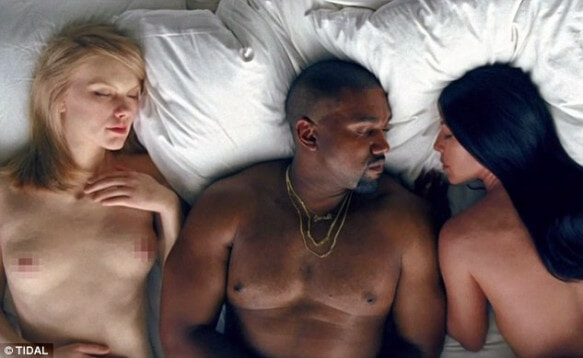 It is not known if the figures are real or if consent was given to have these look-alikes on his video. And we are quite sure Taylor didn’t give her ok.

Taylor, 26 is said to be against the song for its ‘strong misogynistic message’ and is ‘mad as hell’ that a naked wax lookalike of her appeared in the video.

Playing with fire, Kanye West then went on to taunt Taylor further, posting on Twitter: “Can someone sue me already #I’llwait”.

The rapper had recently rekindled the quarrel with the young star when he referred her in his song lyrics, ‘I feel like me and Taylor might still have sex / I made that b*tch famous’.

Kanye said that he had called Taylor prior to using her name in the song, and was given a verbal consent, to which Taylor confirms that she did speak to him on the phone, but no consent was given.

Supporting her husband, Kim has stated in a recent interview that the lyrics was approved, and that they have agreed to laugh about it during the Grammy awards. There are also claims that the Wests hold viable evidence that the consent was given by Swift.

The Sun has reported to have seen a lawyer’s letter demanding Kanye to destroy the phone recording. A source has also shared with the paper that Taylor is worried about the truth being exposed.

“Taylor got her lawyers to threaten Kanye and demanded that the recording was killed.”

“They stressed the phone call was confidential and that publishing it would violate her rights.”

“It validates that a taped conversation where Taylor was on board with the song does exist, and just shows how worried she is about the truth coming out.”

Whatever feud and claims that came out of this, it’s again a he said she said thing. Plus, it’s Kanye just being Kanye. We’ll just sit back and enjoy the show.