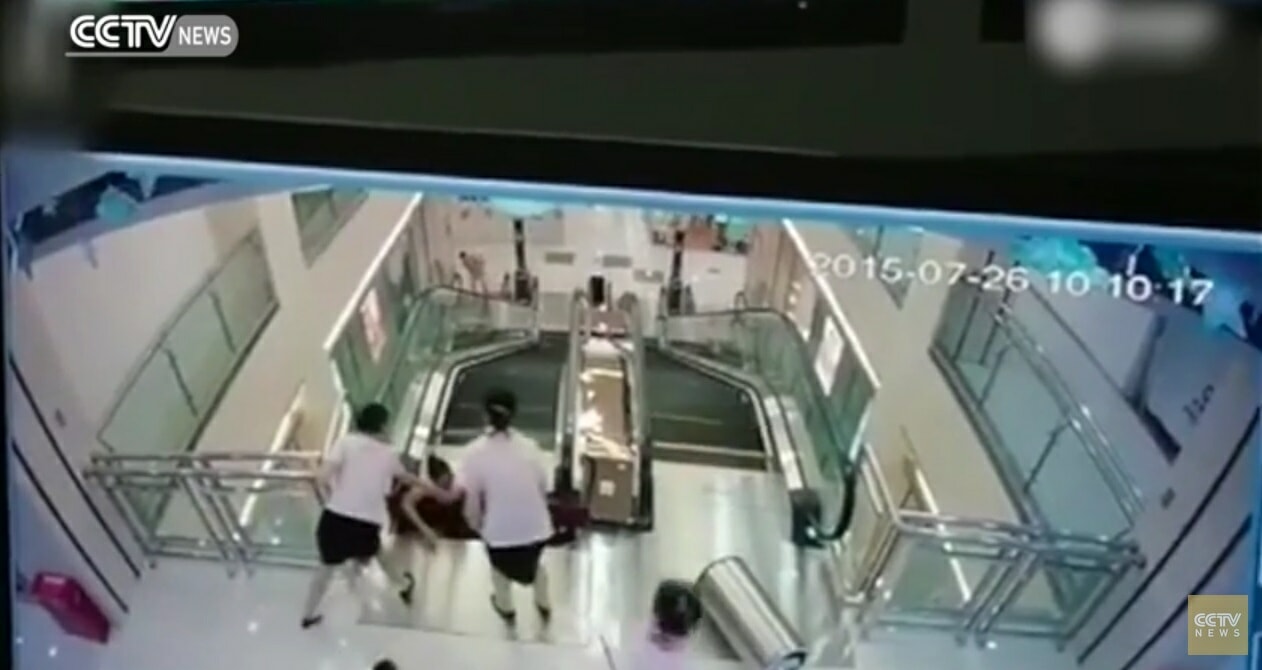 This latest news got everybody’s stomach churning. Warning, content may be disturbing for some audience.

Jingzhou, China – A woman fell and was killed in escalator gears after a panel gave way. Before she was dragged under, she heroically pushed her son to safety.

In the video, a woman is seen riding the escalator with her 2 year old son. After stepping off the top of the escalator, the panel below her feet gave way and she fell inside, not before throwing her son to the safety of 2 bystanders.

Apparently reports said that the 30 year old woman, Xiang Liujuan, rode the escalator with her child for fun, because the kid wanted to. At the bottom of the escalator was the dad who observed and waited for them while they took their ride. Half way through the ride up, the two ladies on top informed the Xiang that there was something wrong with the escalator and that she needed to be careful, so she carried the child instead. Unfortunately, just like the terrorizing scene from Final Destination, she was engulfed by the exposed escalator mechanics despite a mall employee trying to pull her up.

Local reports stated that it took emergency respondents nearly 4 hours to retrieve her body from the escalator’s inner chambers.

Officials in Jingzhou, a city of more than 5 million residents in Hubei province, blamed human error for the tragedy at a news conference Monday night.

“Mall employees found the collapsed panel to be loose and protruding five minutes before the incident but failed to stop the escalator for inspection and repair”, said Chen Guanxin, the local official in charge of work safety.

Chinese state media reports that the accident was caused by maintenance workers who forgot to screw in the metal floor panel at the top of the escalator.

As to why the employees did not push the emergency ‘stop’ button on the escalator was sheer stupidity as the whole crisis could have been averted, and a life saved.

Xiang’s family was outraged and her sister-in-law lashed out saying:

“An ordinary Sunday shopping trip ended up in such a sudden tragedy, almost ruining an entire family,” while posting some of the earliest pictures from the scene on the popular microblogging site Weibo.

“The shopping mall is still open and the killer escalators are still running,” she added. “Shoppers have no idea about the tragedy upstairs and no one knows if such disasters will strike again.”