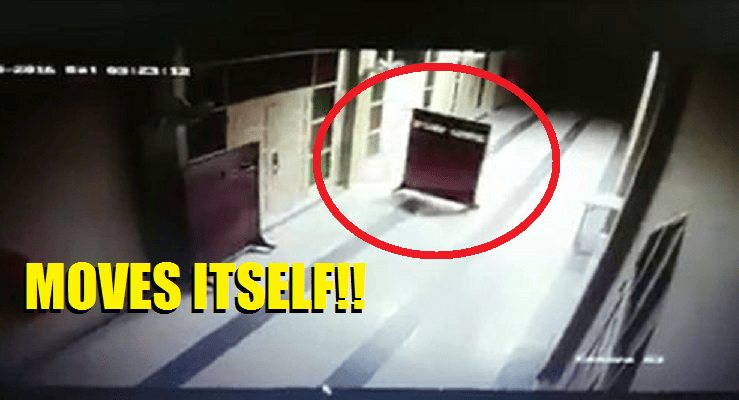 Earlier this week, netizens were spooked by a video uploaded by Jasin Daily Facebook, showing a ‘poltergeist’ swinging around two prayer room partitions in the hallway in a random manner.

In the two-minute video of CCTV footage, two prayer room partitions can be seen randomly gliding across the hallway of the Masjid Baru Kampung Tedong in Malacca.

The mosque’s chairman, Akhbar Ali, told Sinar Harian that the spooky incident was captured last month, a week before the start of the fasting month.

He told the Malay daily that he uploaded the eerie footage to “reflect the greatness of the Almighty as it happened in God’s house”, and not to steer spooked worshippers away.

Malacca Chief Minister Datuk Seri Idris Haron told  The New Straits Times that he will call for an investigation into the clip.

“I will direct the state religious authorities and local scientists to investigate this.”

“This is because we do not want the incident to invite various reactions from members of the public especially during the month of Ramadan,” he told The New Straits Times after handing out Raya aid and goodies to Tangga Batu constituents at Sungai Udang Prisons.

Idris, who is also Malacca Islamic Religious Council (Maim) chairman, said he himself has seen the video clip and felt that it did not appear like an orchestrated prank.

“The movement of the partitions appeared random,” he said

He did however note that technology nowadays allows people to cut and paste and superimpose footages.

He urged members of the public to not speculate on the incident til investigations have run their full course.